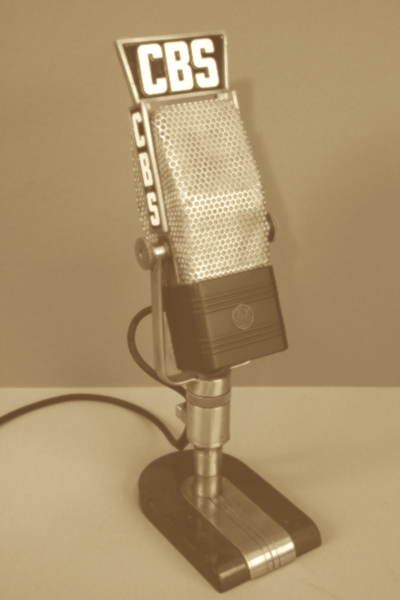 1937 was a memorable year in US history. Disney released SNOW WHITE, the first full-color, feature-length animated movie. The Hindenburg disaster occurred on May 6. Howard Hughes established a record by flying from LA to NYC in under 8 hours. The Golden Gate Bridge opened in San Francisco. Amelia Earhart disappeared. George Gershwin died. And Daffy Duck was born — on April 17, in the animated short "Porky's Duck Hunt," directed by Tex Avery for the LOONEY TUNES series. This last factoid dovetails with a coincidence that would immortalize Raymond Scott's music in pop culture.

Exactly 75 years ago today, Raymond Scott recorded his iconic hit tune, "Powerhouse." On the same date, following 8 months of rehearsals with his Quintette at CBS, he also recorded "Twilight In Turkey," "Minuet In Jazz," and "The Toy Trumpet" — not a bad day's work. The 27 year-old couldn't have known at the time, but these compositions jump-started his stellar career, and came to underscore cartoon antics for future generations.

To celebrate the milestone, check out this collection of 75 YouTube clips of Scott's classic "Powerhouse," here — and see details about our year-long 75th anniversary events schedule here.

New Spaced-Out 2-track Single:
"By Rocket To The Moon" 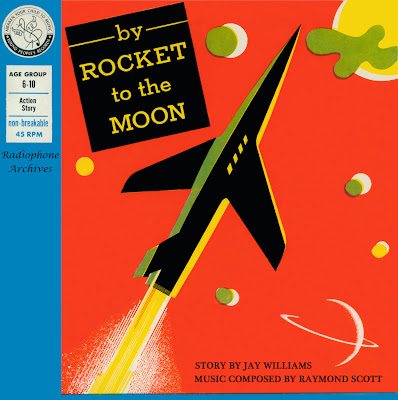 Fasten your safety-belt — we're going by rocket to the moon. 20 years before NASA landed the first man on the moon, Raymond Scott and his quintet made this children's record, with narration, featuring five educational songs sung by the Gene Lowell Chorus. Originally released in 1950, this oddity has now been been digitally remastered, for the first time, as part of our year-long celebration of the 75th Anniversary of RS's music. The b-side is the related 1949 instrumental, "Dedicatory Piece to the Crew and Passengers of the First Experimental Rocket Express to the Moon." Download from the Apple iTunes Store: here
Posted by Jeff Winner at 4:56 PM 2 comments: 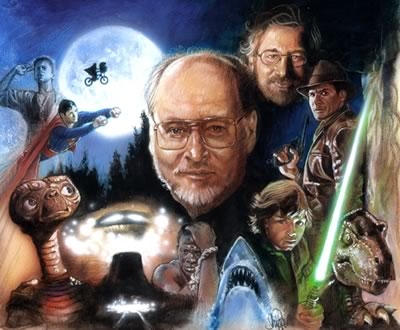 Movie music maestro John Williams turns 80 years-old today. To celebrate, I'm releasing never-before-seen footage of Williams remembering Raymond Scott. This rough footage was shot by me, Jeff Winner, while Stan Warnow (Scott's son) and I interviewed John Williams at Tanglewood, in Massachusetts, on August 4th of 2008. Some of Stan's professional camera footage appears in the new feature-length, award-winning documentary film, "DECONSTRUCTING DAD," but this segment has never been seen before. Watch here <<<

From Wiki: John Williams was born on February 8, 1932 in Long Island, New York, the son of Esther and John Williams, Sr. (aka Johnny Williams). His father was a jazz percussionist who played with The Raymond Scott Quintette.

John Towner Williams is an American composer, conductor, and pianist. In a career spanning almost six decades, he has composed some of the most recognizable film scores in the history of motion pictures, including the Star Wars saga, Jaws, Superman, the Indiana Jones films, E.T. the Extra-Terrestrial, Hook, Jurassic Park, Schindler's List, Home Alone, and the first three Harry Potter films. He has had a long association with director Steven Spielberg, composing the music for all but two of Spielberg's major feature films.

Other notable works by Williams include theme music for four Olympic Games, NBC Sunday Night Football, the NBC Nightly News, the rededication of the Statue of Liberty, the DreamWorks Pictures production logo, and the television series Lost in Space. Williams has also composed numerous classical concerti, and he served as the principal conductor of the Boston Pops Orchestra from 1980 to 1993; he is now the orchestra's conductor laureate.

Williams has won five Academy Awards, four Golden Globe Awards, seven BAFTA Awards, and 21 Grammy Awards. With 47 Academy Award nominations, Williams is the second most nominated person, after Walt Disney. John Williams was honored with the prestigious Richard Kirk award at the 1999 BMI Film and TV Awards. The award is given annually to a composer who has made significant contributions to film and television music. Williams was inducted into the Hollywood Bowl Hall of Fame in 2000, and was a recipient of the Kennedy Center Honors in 2004. 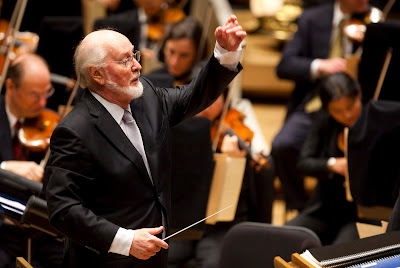 Posted by Jeff Winner at 7:11 PM No comments:

On this date, Raymond Scott passed away at age 85: THE NEW YORK TIMES obituary 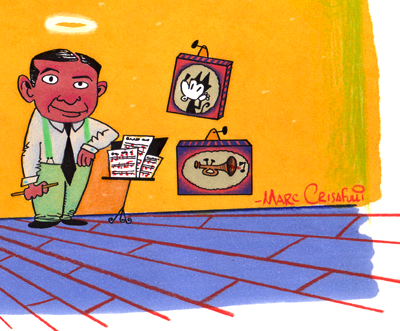 On this date in 1994 Raymond Scott passed away at age 85 — obituary from THE NEW YORK TIMES:

Raymond Scott, a jazz composer, pianist, band leader and inventor whose music found its way into dozens of Warner Brothers cartoons, died yesterday in the Country Villa Sheraton Nursing Home in North Hills, Calif. He was 85 and lived in Van Nuys, Calif.

The cause was pneumonia, said Irwin Chusid, the director of the Raymond Scott Archives in Hoboken, N.J.

Mr. Scott, whose original name was Harry Warnow, was born in Brooklyn to Russian immigrants. His father was an amateur violinist who owned a music shop. Mr. Scott played piano from an early age but planned to study engineering at Brooklyn Polytechnic Institute. His older brother, Mark, a violinist and conductor, steered him to the Institute of Musical Art (later renamed the Juilliard School) by offering to pay his tuition and buying him a Steinway grand piano.

After graduating from the institute in 1931, he was hired as a pianist for the CBS Radio Orchestra, which his brother conducted. When not performing, he composed quirky comic tunes, with evocative musical effects, like "New Year's Eve in a Haunted House," "Dinner Music for a Pack of Hungry Cannibals" and "War Dance for Wooden Indians."

In late 1936, he changed his name to Raymond Scott and formed a six-man jazz group (he insisted on calling it a quintet) that performed his compositions and achieved considerable popularity for two years. In the 1940's Mr. Scott led several of his own orchestras.

In 1943, Carl Stalling, the music director of Warner Brothers, began incorporating Mr. Scott's evocative music into the "Looney Tunes" and "Merrie Melodies" cartoons. His quintet's music from the late 30's is now used as background music for "The Ren and Stimpy Show" on Nickelodeon.

Mr. Scott composed the music for the 1946 Broadway show "Lute Song," composed and performed music for films, and led the band on the television program "Your Hit Parade" from 1950 to 1957.

In the late 1940's, he turned his hand to inventing electronic instruments, such as the Karloff, a machine that imitated sounds like kitchen noises, the sizzle of a frying steak, or a cough. Another of his inventions was the Clavivox, a keyboard instrument that imitated the sound of the human voice. He also created an early version of the synthesizer.

His best-known compositions were recently released by Columbia on "The Music of Raymond Scott: Reckless Nights and Turkish Twilights."

He is survived by his third wife, Mitzi; three daughters, Carolyn Makover of Fairfield, Conn., Deborah Studebaker of Los Angeles, and Elizabeth Adams of Watervliet, N.Y.; a son, Stanley, of Mamaroneck, N.Y., and 10 grandchildren.
Posted by Jeff Winner at 11:17 AM 1 comment: 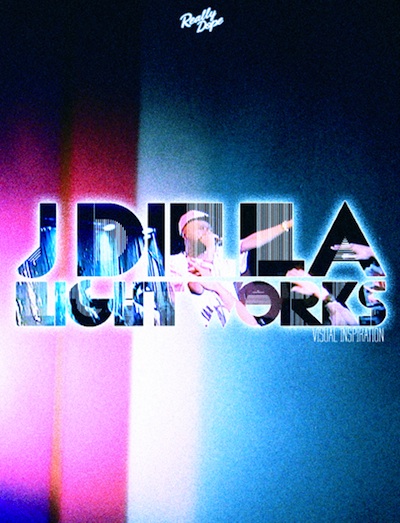 Happy birthday to the late James Dewitt Yancey, aka Jay Dee, and J Dilla, who would have been 38 years-old. NPR said the Detroit-based producer and rapper was "one of the music industry's most influential hip-hop artists," working with De La Soul, Busta Rhymes, A Tribe Called Quest, Janet Jackson, Macy Gray, Common, The Roots, D'Angelo, and Erykah Badu. Dilla released his solo album, DONUTS — which he wrote and recorded while in and out of the hospital — only 3 days before his tragic passing in 2006 at age 32. (He'd been battling Lupus for 3 years.)

DONUTS features several samples from Raymond Scott's vintage electronic tracks, including "The Tomorrow People," and "Melonball Bounce." But, as the LA TIMES reported this morning, "one of Dilla's most accomplished works comes via the idiosyncratic use of the Raymond Scott composition 'Lightworks,'" which has since been re-reworked by Q-Tip, Talib Kweli, MF Doom, Peanut Butter Wolf, Questlove, and Busta Rhymes. Along with other modern artists who cover Scott tunes (Gorillaz, El-P, Madlib), Dilla's work steers new fans to Raymond's originals. And like Scott, Dilla was a studio pioneer whose music and influence lives on. The J Dilla Foundation is hosting a series of global tribute concerts during the coming week, with Busta Rhymes and others. Info: here 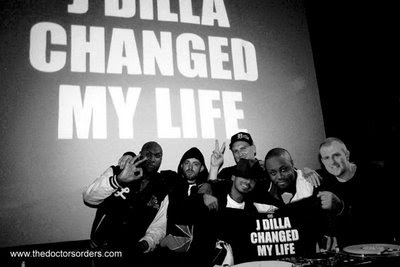