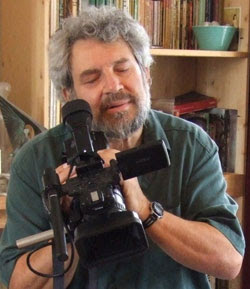 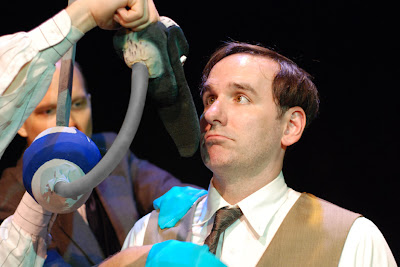 With puppetry and live action, swing dancing and physical comedy, POWERHOUSE tells the story of a brilliant man who wrote music that nearly every American has heard and yet almost no one can identify. It’s 1936 and 27 year-old Harry Warnow has it all — a beautiful wife, a hit record, a recording company, a publishing company, his very own swing orchestra and a new name: Raymond Scott. But in 30 years he would be virtually unknown. Secluded in his home studio, he would spend his time writing commercials and inventing futuristic music machines. Unbeknownst to Scott, however, his music had become imprinted on the minds of millions. For years, the animators at Warner Bros. had been scoring their Looney Tunes cartoons with Scott’s life’s work. This would be his legacy — and he never knew. Featuring puppets playing cartoons, people playing machines, and machines playing music, the acclaimed Sinking Ship Productions presents the world premiere of POWERHOUSE at the 2009 New York International Fringe Festival.

You can download a pdf of the show's press release here. The production opened Saturday. Scott's son Stan Warnow was impressed, emailing: "It was well done and inventive. Staging and directing were very good. It was fluid and moved right along, lots happening on stage." Although we haven't yet seen the production, we met with Jon Levin and Josh Luxenberg a few months ago while they were researching the project. Their absorption with the details of Scott's legacy conveyed impressive intentions to tell the story respectfully, if idiosyncratically. And they were nice guys, so we're cheering them on.
Update 1: reviewed by The New York Times Arts Beat:

Powerhouse, which somehow manages to pack very funny puppetry, exuberant dance numbers, fascinating historical tangents, a mountain of narrative and a vivid sense of period mood into one steam train of a drama, is the rare Fringe show that lives up to its title.

Update 2: Another satisfied customer: "Every element was perfect and brilliantly creative. It's what live theater can be that no other medium can match." Update 3: TimeOut New York: "... a kinetic and visually enchanting production. Aiming to honor the mad, creative urge to perfectly transmute ideas into art, Powerhouse succeeds beautifully." Update 4: Doesn't anyone not like this show? Update 5: Andrew loved it (and so did Andrew): "Powerhouse is that rare Fringe Fest gem that doesn’t come across like a drag show on steroids." Update 6: Jeff Winner attended the August 22 performance and met some of the cast, including Erik Lochtefeld, who plays the lead. Jeff reports:

Finally, after all these years, I met Raymond Scott! I had read he was only about 5'9", but apparently that was just part of the Scott mythology. He's actually 6'5". Photographic evidence: 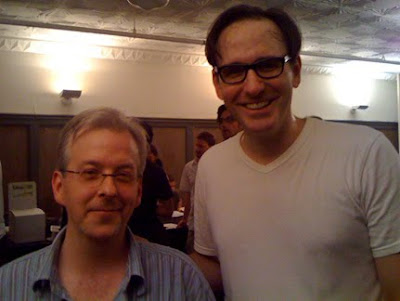 Photo: Das Überbabe
Posted by Irwin Chusid at 9:18 AM 6 comments: 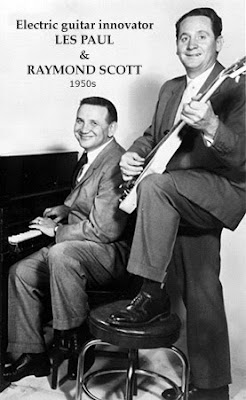 Below is an excerpt from THE WORLD OF SOUND, a chapter I contributed to the SOUND/UNBOUND anthology, compiled by Paul D. Miller, aka DJ Spooky:

In 1952, Raymond Scott designed and built two of the world’s first multi-track tape machines, capable of recording seven and fourteen parallel tracks on a single reel. Two years later, sonic maverick Les Paul made an eight-track prototype, and inventor Hugh Le Caine devised a way to mix-down six separate tape sources in 1955. But as author/music historian Thom Holmes points out, “nobody came close to matching Scott’s early achievement.” Scott filed two patents for his advancements in magnetic tape technology in 1953, and a third in ’59.

Neil Strauss included a chapter about Raymond Scott in his new book, EVERYONE LOVES YOU WHEN YOU’RE DEAD, and added this footnote:


"During an interview with Les Paul, the musician who helped develop the electric guitar and popularize multi-track recording, I mentioned Raymond Scott and accidentally set him off on a tirade. Evidently, the two were rival innovators. 'He used to come to my house,' Paul snapped. 'He sure had some equipment though. I envied him.'"