Summit, New Jersey, Christmas 1942: The "famous Raymond Scott Quintet, featuring Dorothy Collins," performs for a "Holiday Assembly" at the Masonic Hall. Article pasted in a scrapbook along with the original RSVP invitation and four photographs of the dance, in which one can barely discern a band in the distance. The dancers appear to be well-dressed, well-behaved teens; presumably this was a high school event, though no HS is identified.

1) The bottom paragraph references Scott's "Silent Music." This "unrecorded" work has long been part of Scott lore—a "composition" consisting of no notes, a silent performance in which the musicians go through the motions of playing without making any sounds. This was a decade before John Cage's legendary noteless work 4'33", which caused such a ruckus when it was introduced in concert by David Tudor in 1952.

2) The creepy photograph of Scott.

Thanks to Dennis Kelly for the artifact.
Posted by Irwin Chusid at 12:01 AM No comments: 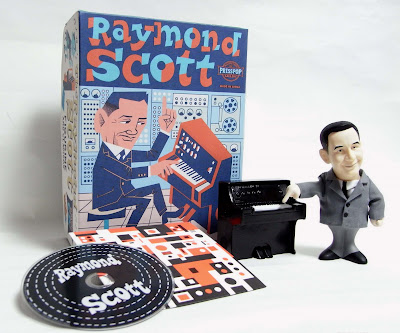 The deluxe limited edition package features a miniature replica of Scott's Clavivox, his patented 1950s keyboard synthesizer, and a CD featuring rare, unreleased tracks from the Scott Archives. Presspop have produced only a small batch of these unique high-quality sets, so order now (Presspop's Bob Moog figurine sold out quickly). RaymondScott.com is the exclusive US retailer. In-stock & shipping now.

P.S. Celebration on the Planet Boing.

Los Angeles based soundtrack musician Ego Plum, who scores the Nickelodeon cartoon series MAKING FIENDS, has slipped a Raymond Scott tribute into an episode.  It's a fake commercial for onions based on Scott's real 1960s commercial for Lightworks brand cosmetics, featuring series creator Amy Winfrey on vocals.  > > > View it: here
Posted by Jeff Winner at 12:50 AM 2 comments: