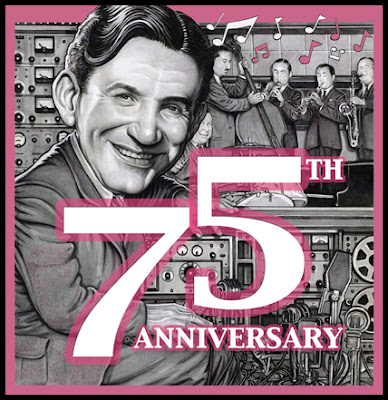 2012 marks the 75th Anniversary of Raymond Scott's music, which is forever associated with Bugs Bunny and Daffy Duck — though bandleader-composer Scott had no interest in cartoons. Ever!

Composer, electronic music pioneer, inventor, and bandstand drill sergeant Raymond Scott was born Harry Warnow, in Brooklyn, in 1908. After graduating from Juilliard, he wrote the 1934 hit song “Christmas Night In Harlem,” recorded by Louis Armstrong. In December 1936, Scott debuted his six-man “Quintette,” which featured jazz giant Bunny Berigan on trumpet and drummer Johnny Williams, father of famous movie score composer John Williams. By early 1937, Scott's Quintette were stars on radio, on records, and — after landing a contract with 20th Century Fox — in Hollywood films. The RSQ reeled off a string of quirky hit records, including “Powerhouse” (recorded February 20, 1937 in New York at their first studio session). Thanks to its being quoted by Carl Stalling in dozens of LOONEY TUNES, the "Powerhouse" melodies have become genetically encoded in the DNA of every earthling.

The Raymond Scott Archives celebrates the 75th with a series of live events and special projects (listed below). If you plan to coordinate an event, record Scott's tunes, or write about Scott, contact: info@RaymondScott.com. We can provide sheet music, photos, and historical resources. We are available for interviews and to host local programs.
• On December 1st, 2011, the New York-based Raymond Scott Orchestrette reunited to perform at Lincoln Center, as part of the Target® Free Thursday series — watch the new video slideshow with music: here

• Basta Audio-Visuals, the European label is planning several releases, including two vinyl LP replicas (which are available now — details here): Scott's 1957 orchestral THIS TIME WITH STRINGS, and a rare stereo mix of 1959’s THE UNEXPECTED, performed by Scott’s all-star jazz ensemble The Secret Seven. And a new 2-track single has also been released on the iTunes store — info: here.

Live performances of Scott's animated compositions (jazz, pop, and electronica) will take place around the globe, including:

• Norway: The MeaNensemble presents “White (Brain) Wash in concert: A Tribute To Raymond Scott & the Perfect World of Commercials”

• Colorado: The Expedition Quartet present “An Acoustic Dinner with a Pack of Hungry Cannibals”

Portrait of RSQ © by Drew Friedman