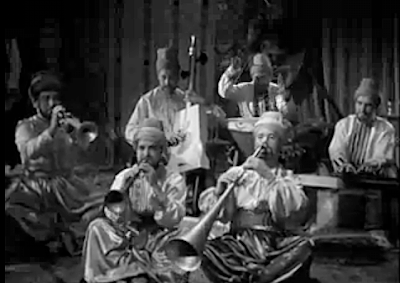 For some reason we've never posted the film clip of Scott's legendary 1937-39 Quintette miming "Twilight in Turkey" in the 1937 Eddie Cantor farce Ali Baba Goes to Town. It's both entertaining and historically significant. There is precious little footage of the 1930s RSQ, and despite the gag performance, the viewer gets the sense of the band's chemistry. Scott typically assumes a minor role—no close-ups, a mere background prop, as befits his often acknowledged discomfort being on camera. What immediately comes to mind is Scott's derisive quote about why he left Hollywood and flew his band back to New York a year later: "We are musicians, not comedians." Nevertheless, it's great to see drummer Johnny Williams even when he's faking it.

We were reminded of this great film clip by the discovery of this 1942 Spike Jones Soundie (short music film), "The Shiek of Araby." It's an obvious homage to the RSQ performance: 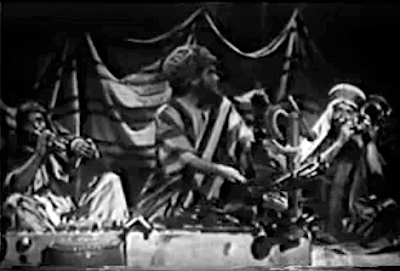 Posted by Irwin Chusid at 8:39 AM No comments:

Stu Brown is bringing his Raymond Scott Project to the Cheltenham Festivals on April 29th:

Since the launch of the Music Festival in 1945, Cheltenham has been at the forefront of contemporary British culture. With combined ticket sales of over 150,000 the festivals have justly earned their place at the centre of the UK’s cultural scene.

The new Raymond Scott documentary film, DECONSTRUCTING DAD, will have it's official UK premiere at the Sensoria Film Festival on April027:

Sensoria is the UK’s festival of film and music. Sensoria’s natural home is Sheffield, England. The festival has risk-taking and innovation at its core. It is informal and informative.
Director Stan Warnow (Scott's son) will be interviewed by Martyn Ware (The Human League/Heaven 17) and give a Q&A following the screening.

Return of the Puppets

Sinking Ship Productions, who staged this show in 2009 in New York City, reports:

We were one of 3 winners in the Vertical Response 'New Deal' competition. That means we won $2,500 BECAUSE OF YOUR VOTES! What will we do with the money? We're putting it toward a new production of Powerhouse, which we first presented at last year's New York International Fringe Festival. We're currently in rehearsals, continuing development, preparing for a full run of the show. No dates have been set yet, but we'll keep you posted.

Volume 3 of Raymond Scott's groundbreaking ambient electronic album series, SOOTHING SOUNDS FOR BABY, features a track titled "Little Miss Echo." In 1962, about a year before the series was released, a high-tech doll of the same name was introduced by the American Character Doll Company. Built into the Little Miss's chest was a miniature battery-powered tape machine controlled by a knob styled to look like a bow; the device would repeat up to 25 seconds of speech.

Scott had two young daughters at the time, and I speculated they might have owned the doll, but they don't recall it. Considering his lifelong fixation with all aspects of sound recording, it's likely Scott was intrigued by the novelty toy. Perhaps he was inspired by

this creepy TV commercial, or maybe it was just a coincidence. At any rate, Raymond would be shocked to know he himself is now a doll. 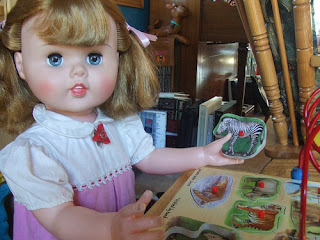