PART FIVE: The Case of the Multiple Raymond Scotts

Raymond Scott had a wild imagination, yet the man born Harry Warnow chose a banal pseudonym. A Google search spotlights plenty of Raymond Scotts who are not our Raymond Scott. Part five — possibly the final installment — of a diversionary series (part 1, part 2, part 3, and part 4): 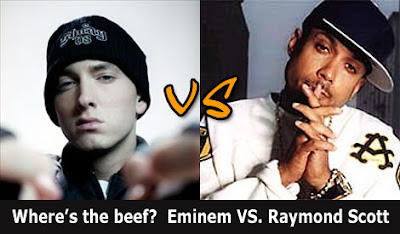 Benzino is the stage name of this Raymond Scott, who was also an owner of The Source magazine. An "inactive" or "failed" rapper, he may be most famous for his feud (a "beef" in hip-hop vernacular) with rival rap star Eminem, aka Slim Shady, aka Marshall Mathers. Benzino was hating on Eminem's fame, claiming that his success further isolated black and Latino rappers. He even went so far as to call Em "THE RAP HITLER."

Ray fired first with a disrespect record titled "I Don't Wanna" in which he asserted that Eminem was not true to the rap culture. Eminem retaliated with two diss tracks, attacking The Source by revealing their tactics of "butt-kissing motherfuckers for guest appearances," and claiming "real lyricists don't even respect you or take you serious." "The Sauce" reveals a similar lyrical theme as Em continues attacking Benzino and his magazine: "No more Source for street cred, them days is dead / Ray's got AKs to Dave Mays' head / It's extortion, and Ray owns a portion."

The Source then dug up an old tape in which a young Eminem was rapping slurs against Blacks and women. The publication devoted extensive coverage to the discovery of the recordings, and also the (alleged) negative impact that Eminem has had on the hip-hop industry. Em did not deny making the tape, yet sued The Source for defamation and copyright infringement.

Mr. Scott, who is no longer involved with the magazine, still hasn't officially squashed the beef, and continues to feud with Mr. Shady and his associates.

Em discusses the disses: here.
Posted by Jeff Winner at 8:37 AM No comments:

Excerpts from THE WORLD OF SOUND, a chapter I (Jeff Winner) contributed to the SOUND/UNBOUND anthology, compiled by Paul D. Miller, aka DJ Spooky:

In August of 1970, Motown Records founder Berry Gordy read an article in Variety magazine about Raymond Scott and his Electronium. Along with The Beatles and The Beach Boys, Motown virtually controlled the 1960s pop charts with stars like Stevie Wonder, Marvin Gaye, and Diana Ross & The Supremes. And with THE JACKSON 5 as his latest smash supergroup, Gordy was at the height of his influence. ...

Hoby Cook was a technician at Motown’s MoWest facility who tested Scott’s Electronium extensively. “I wanted some reactions, so as an experiment, I’d open the door and turn the volume up — loud.” Cook’s technique worked. Motown personnel heard the curious sounds and wandered in. “Cal Harris did a lot of recording with it, and MICHAEL JACKSON was fascinated,” Cook recalled. “He was just this kid sitting there, staring at the flashing lights. He said he wanted THE JACKSON 5 to use the Electronium somehow.” 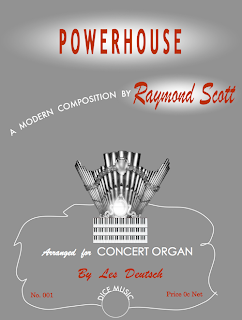 Our friend and fellow Scottologist Les Deutsch has been transcribing classic 1937-39 Raymond Scott Quintette recordings into first-time-on-paper sextette charts. (Scott did not use charts with his band; he taught parts by ear via keyboard example.) Les has also been creating new arrangements for vintage Scott works, and recently configured "Powerhouse" for concert organ. The chart can be downloaded as a free pdf here, and you can grab an mp3 of Deutsch's performance of the arrangement here.

About the fabricated cover image above, Les explains:

"The pipes are from the organ prop used in Disney’s 20,000 Leagues Under the Sea as Captain Nemo’s salon organ aboard the Nautilus. I remember seeing this set on display at Disneyland in the mid-1960s. The organ console later made its way into Disney’s Haunted Mansion ride, where it sits today – but minus this whimsical set of pipes. I searched the Web and found a photo someone had taken of the old Disneyland exhibit."
Posted by Irwin Chusid at 1:01 AM No comments: 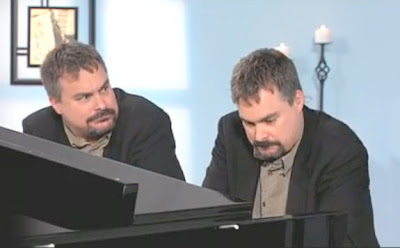 Posted by Irwin Chusid at 4:56 AM No comments: 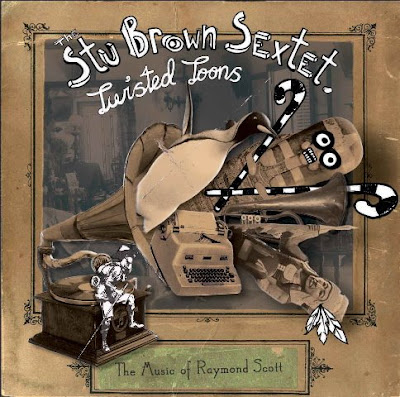 We've been covering the development of Stu Brown's Raymond Scott Project for over a year. The CD is now OUT. Stu has posted some tunes from the album on his website in the Audio section. He'll soon be updating his ƒ@ceb()()k and m¥$på¢e pages. The album can be pre-ordered directly via Stu's site in the Store section, or via the my§p@¢e page.

The striking cover was designed by Ali Whitty, developed from an original idea by Stu, who says: "The old photo album look continues throughout the inside of the sleeve and on the back cover." Stu adds that later this month the album will be available in the US via digital etailers, CD Baby, Amazon and as a special order via record stores.

Lullatone Will Rock You ... To Sleep

Lullatone are a husband-and-wife team based in Nagoya, Japan, who revere the electronic music pioneer Raymond Scott the way House reveres Facetti. Taking Scott’s 1963 Soothing Sounds for Baby albums as their starting point, Lullatone have developed a hypnotic, childlike sound that attains a lapidary brevity in their sound stamps (basically audio logos) for the Japanese public broadcaster NHK.

Lullatone's newest collection, We Will Rock You… to Sleep (an introduction to Lullatone), is a sampler CD with tracks from all of their previous albums, including one track from their upcoming disc of loops for babies.
Posted by Jeff Winner at 3:53 PM No comments:

celebration on the planet earth

Recordings of our May 18 Caltech Raymond Scott concert are now posted on my website. The concert was recorded with a portable digital Ederol machine. I have further processed the files to invert the "Dabney boom filter."

I have also posted a recording of "Celebration on the Planet Mars." This is my contemporary setting – not a transcription. This is how Scott’s music might be played today, I think, if he were still around. The Caltech Thursday Jazz Band did an excellent job with the tune.
Posted by Irwin Chusid at 7:15 PM No comments:

Stan Warnow, Scott's son, has been developing a documentary film about his father for a number of years. He sent this update:


Deconstructing Dad: The Music, Machines and Mystery of Raymond Scott (that's the film's new title) has been selected for showing at the Biografilm Festival, in Bologna, Italy. The film listing is here. In many ways this is the ideal festival for my film because it is a “celebration of lives,” and it’s always been my intent to showcase my father’s life as a whole, not just one of its many and varied phases. The festival runs June 10-15, and the film is scheduled for showing Friday, June 12. Coincidentally this year’s festival also celebrates the 40th anniversary of Woodstock, and as I was a cameraman and editor on that film, they’ve asked me to participate in their Woodstock events. If you're in the neighborhood, please drop by.

Posted by Irwin Chusid at 9:10 AM No comments: