So you thought J Dilla was first artist to sample Raymond Scott in Hip Hop? Think again. Long before he began to fight crime in the year 2000 as NYPD Detective Odafin “Fin” Tutuola on the NBC-TV drama Law & Order: Special Victims Unit, and before drawing controversy with his 1992 song “Cop Killer,” which depicts a criminal’s revenge on the police, rapper and actor Ice-T was an unlikely early advocate of recycling Raymond Scott’s music. In 1985, the same year he appeared in the movie Breakin' 2: Electric Boogaloo, he released the single "Ya Don't Quit,” which incorporates the famous ‘B’ section from Scott’s iconic 1937 hit tune, “Powerhouse.” A year later he released a sequel, "Dog'n The Wax (Ya Don't Quit Part II)” — which features a different “Powerhouse” element — on his album Rhyme Plays, and as a single on the Sire/Warner Bros. label. Both tracks, which have a Def Jam-era Beastie Boys/Run-D.M.C.-like production, represent the earliest-known examples of Raymond Scott’s music in Hip Hop. Listen to both songs below:

Posted by Jeff Winner at 3:31 PM No comments: 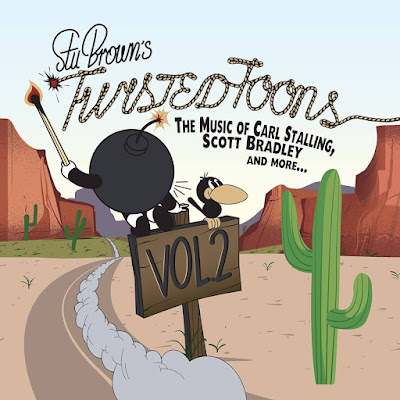 Stu Brown's first Twisted Toons album explored the music of maverick bandleader, composer, inventor and electronic music pioneer Raymond Scott, whose music featured heavily in the Warner Bros. cartoons of the 1940s onwards. His new release, Twisted Toons Vol. 2, delves deeper into the zany world of cartoon soundtracks, including the pioneering work of Carl Stalling, whose brilliantly detailed scores accompanied the antics of Bugs Bunny, Daffy Duck and co., as well as the equally groundbreaking music of Scott Bradley, which underscored the slapstick violence of Tom & Jerry and Tex Avery cartoons. Most of this music has never been recorded or performed live since the original cartoons were made. Expect to hear complete Tom and Jerry, Droopy, Roadrunner and Porky Pig scores alongside new arrangements of Carl Stalling’s commonly used themes (including Raymond Scott’s ‘Powerhouse’ and his own ‘Screwball Theme’), a selection of kitsch 1950’s library music cues that appeared in Ren and Stimpy and Spongebob Squarepants, and some of Bill Frisell’s atmospheric writing for Gary Larson’s Tales From the Far Side.

Preorder the album here: http://stu-brown.com/album/383764/twisted-toons-vol-2-the-music-of-carl-stalling-scott-bradley-and-more
Posted by Jeff Winner at 1:40 PM No comments: 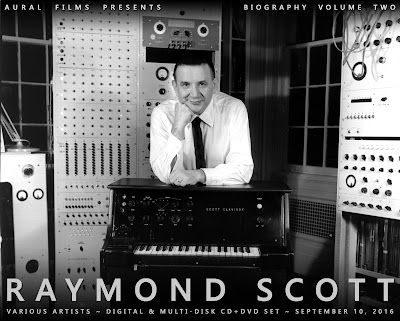 "The Aural Films Biography Series re-presents artists by featuring retrospective collections that re-introduce the public to those who have been working for decades in music and art. Following our initial Biography release featuring artist Thomas Park. Aural Films continues with volume 2 in the Biography Series that will pay special tribute to the work of Raymond Scott." Complete details: here
Posted by Jeff Winner at 5:00 PM No comments: 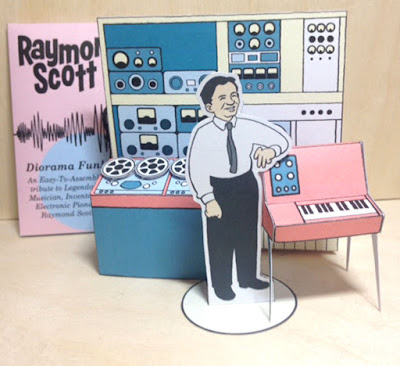 Miles Davis was born on this date in 1926. Although there's no indication that Davis met Raymond Scott, it appears he may have been a fan. About 4 years-ago, I found a Miles Davis 'Blindfold Test' from 1968 — listening to Sun Ra (a tune titled "Brainville"), Davis said: "That's gotta come from Europe. We wouldn't play no shit like that. It's so sad. It sounds funny to me. Sounds like a 1935 arrangement by Raymond Scott. You mean there's somebody around here that feels like that? Even the white people don't feel that sad."
I've discovered another Davis 'Blindfold Test,' this one from 10 years earlier, in which he also mentions Raymond Scott. Here is a brief audio clip I excerpted from the complete 35-minute recording (and I transcribed it because Davis can be difficult to understand):
• • • • • • • • • • • • • • • • • • • • • •
1958 “Blindfold Test” (excerpt)
• • • • • • • • • • • • • • • • • • • • • •
MILES DAVIS: Well, now it’s sickening because everybody plays the cliches that they played 5 years ago.
LEONARD FEATHER: Hmm, or 10 years ago.
MD: And them ‘modren’ (sic) musicians. I really can’t stand to hear too many of those guys now — very few.
LF: What do you think about the West Coast guys?
MD: They can have that. They got all of that… on the West Coast.
LF: Do you think it lacks emotion?
MD: Yes, I think it’s the heat out there. (both laugh) And the movies. I really don’t understand that. You know, I like [jazz drummer and bandleader] Chico [Hamilton], he’s a good friend of mine, ya know, but his band makes me sick!
LF: Well, a lot of it is not Jazz.
MD: I don’t know what it is. I’d rather listen to Raymond Scott’s old quintet.
LF: (laughs)

Posted by Jeff Winner at 2:05 PM No comments:

On this date in 1937, Raymond Scott returned to CBS studios with his Quintette for their third session to record "Dinner Music For A Pack Of Hungry Cannibals." It was an immediate hit when it was released 79 years ago, and is immortalized in "Which Is Witch" along with at least 16 other classic LOONEY TUNES. Download the vintage Columbia recording from the iTunes store, or Amazon, and check-out this cover by Kronos Quartet, plus a live performance by Ego Plum. Below is a private rehearsal by the original Quintette, released on the 2-CD "MICROPHONE MUSIC" collection from the Basta label: 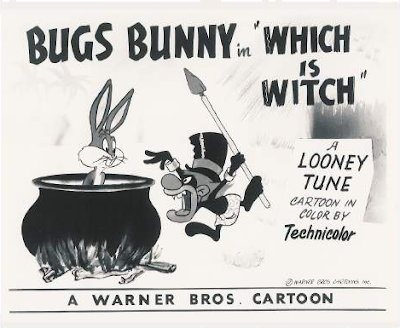 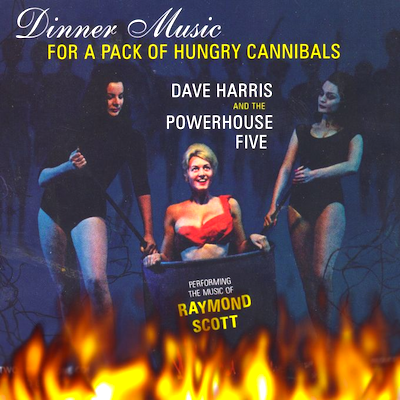 Posted by Jeff Winner at 1:11 PM No comments:

"Spotlight on Film: Deconstructing Dad, excerpt of Powerhouse by The Raymond Scott Quintet... Thanks also to Chainsaw Chuck Majewski for the long ago tip to Raymond Scott’s web site."


Raymond Scott Quintette drummer Johnny Williams once remarked about his boss's penchant for exhaustive rehearsals: "All that discipline helped. It had to. I developed a technique way beyond what I'd had." The West Point Band's Quintette 7 understands discipline, and it pays off in their performances of Scott's quirky tunes, which they'll offer in a FREE concert at the Chappaqua Library Theater on Sunday, May 7th, 2016. (The program will also feature the Q7 performing non-Scott selections such as "Misty" and "Big Noise from Winnetka.") RSVP via Facebook: here
Info from the Library: http://bit.ly/1q0Zm6j
Hear—and buy—tracks from the BEST-SELLING album "Quintette 7 Plays the Music of Raymond Scott": http://apple.co/1Ma1vXW
Posted by Jeff Winner at 3:56 PM No comments: