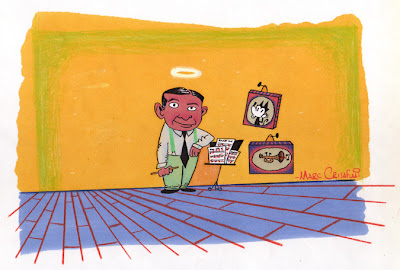 "A few years ago I obtained some sheet music from the Raymond Scott archives so I might perform it for the soundtrack of my college senior thesis animation. Unfortunately I was never able to finish the animation or record the music because of the schedule I was on.

"What I finished (basically sans ending ... and a weak middle...) is available on YouTube.

"Recently I've been working in animation in and around Manhattan, and I've really wanted to play Scott's music again — mostly for myself, not so much for a soundtrack."

Smolenski is currently working at a studio called Flickerlab and animating a short for Conan O'Brien called "Pale Force." 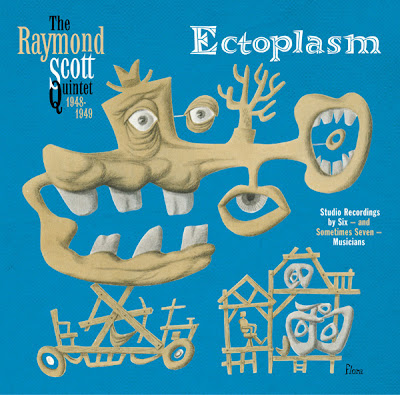 In a design sense, anyway. Their professional paths nearly crossed: early in his career Scott recorded for Columbia Records but left the label in 1941, one year before Jim Flora was hired by Columbia's art department. In the late 1940s, Flora (1914-1998) launched a legacy by illustrating quirky, cartoonish jazz album covers for the label. His historical portfolio includes dozens more for RCA Victor during the 1950s.

Through my working relationship with Jim Flora Art LLC, the deceased artist's estate, I've long wanted to revive this tradition by using rare Flora art on new CDs. Seattle's Reptet released Do This! in 2006, the cover bedecked with a Flora three-eyed monster we call a "triclops." Later this year, the first CD collection of the 1948-49 Raymond Scott Quintet will feature a Flora cover (above) designed by the brilliant Dutch art director Piet Schreuders. The 1951 illustration was most likely rendered during Flora's Mexican idyll. Ectoplasm refers to a Scott composition on the CD, which this author is producing for Basta Audio-Visuals.

N.B.: The Lothars album Oscillate My Metallic Sonatas (released in 2000) adapted Flora's 1955 album cover art for This Is Benny Goodman and His Orchestra (RCA Victor).
Posted by Irwin Chusid at 5:44 PM 2 comments:

A Visa check card TV commercial ("Lunch") that runs on high octane "Powerhouse" has aired sporadically since November 2006. In case you still haven't seen it—or need to view it on demand—it's posted on YouTube. The recording of the Scott classic was created for the spot; no existing version was licensed.
Posted by Irwin Chusid at 10:00 AM No comments: