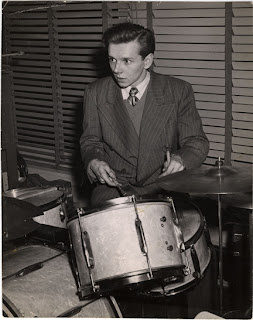 It's a different band than the original 1937-39 RSQ, but trademark Scott quirks abound: wit, sophistication, and a touch of eccentricity. Although rowdy bebop was the rage in those days, Scott preferred a more sculpted, controlled approach—jazz with a pop sensibility. His arrangements were spiced with unpredictable twists and his players crafted sharp, tasteful solos. The RSQ was complex and hyperactive, with an undercurrent of wry mischief, befitting the band's namesake.

... along with parlor-jazz arrangements of the light classics "Humoresque" and "Song of India," and over a dozen idiosyncratic Scott arrangements of Tin Pan Alley wunderwerks. Also making its CD debut, Raymond goes lunar with the visionary opus:

"Dedicatory Piece to the Crew and Passengers of
the First Experimental Rocket Express to the Moon"
Remember: it ain't cartoon-jazz. But stay tooned.
Posted by Irwin Chusid at 9:41 PM No comments: