Irwin and I have previously warned about the dangers of a stunningly boring album recorded by Raymond Scott in 1957, and subsequently issued under three titles in the US. It's my duty to further caution collectors who value their time and/or ears: a fourth pressing of this dreary record was released in 1966 by the Spanish label Orlador, with the title MUSICA PARA LA INTIMIDAD. I would have guessed this means "Music For Intimacy," but according to at least one Google translator, it's "Music For Privacy." Had RS kept the recording private, the world would be a better place. Not even a sexy chica displaying her color-coordinated pants, shoes, and upholstery can make this lackluster album worth purchasing. If you see this record, run away. If you're unfortunate enough to already own a copy, under any of its titles, please smash it with a hammer into a thousand little pieces, place the debris into a Ziploc baggie, and send it to me or Irwin; we will incinerate all copies at a public bonfire in Texas on September 9th at midnight. Location TBA. Consider this a WANTED poster (click image for larger view): 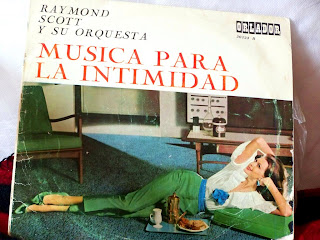 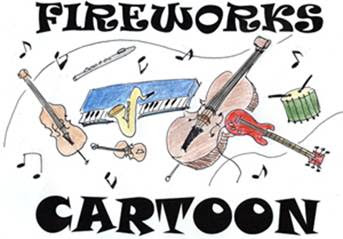 Fireworks will perform four classic cartoon scores as live soundtracks to the original animation, including an early 1930s Stalling score (The Village Smitty, featuring Flip The Frog) and his daredevil score for the Coyote and Roadrunner classic There They Go-Go-Go! The concert also features a set of works by Raymond Scott in their original jazz-ensemble setting, including "Powerhouse," "Dinner Music for a Pack of Hungry Cannibals," and "War Dance for Wooden Indians."

Fireworks is recording an album of classic cartoon music, which will include several Scott compositions.
Posted by Irwin Chusid at 7:02 PM No comments:

The Toy Trumpet for accordion 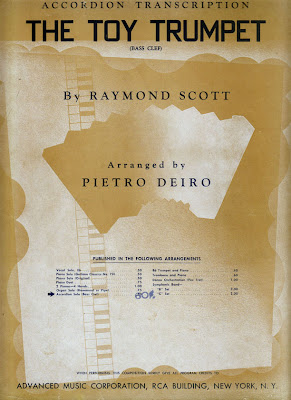 Another eBay score: like "Powerhouse" for accordion which we offered free for the asking last week, here's "The Toy Trumpet." Drop us a line and request the chart as pdf.
Posted by Irwin Chusid at 2:28 PM No comments: 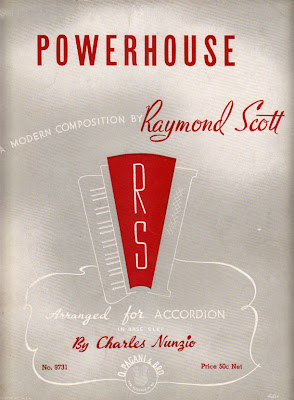 Snared on eBay—cheap. Five-page sheet music now scanned and cleaned up. Got a squeezebox? Want a free pdf? Drop us a note, ask nice.

Vintage uncertain: "Powerhouse" was composed by Scott and copyrighted by Circle Music, his original publishing company, in 1937. Circle was listed on this accordion chart as publisher. However, Circle ceased to exist in 1943 when Scott's catalog was sold to Warner Bros., who folded it into their Advanced Music Corp. holdings.

In 1964, U.S. rights to "Powerhouse" and hundreds of other Scott titles reverted to the composer, who sold most of them to Music Sales Corp., the current publisher. Warner retained non-U.S. international rights, now controlled by the umbrella corporation Warner-Chappell. Scott retained about one hundred copyrights for his self-owned publishing company Gateway Music.

The 1943 sale of Circle rights to Warner provided the foundation for Carl Stalling's freedom to adapt Scott compositions in Looney Tunes and Merrie Melodies.

Hat tip to Jeff Winner for the eBay alerts.
Posted by Irwin Chusid at 1:29 PM No comments: