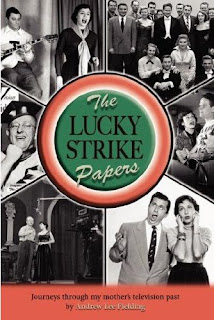 In Andrew Fielding's new book, THE LUCKY STRIKE PAPERS, the author recounts his 1979 interview with Raymond Scott: "I'm so much of a secluded operator — a seclusionist, I guess," said Scott, continuing:


One of the funniest things that ever happened to me was — the very first time I went on the road with a dance band. I wasn't the type to go out to the city's nightclubs and meet with other bandleaders in town and get together where they would hang out. I never did that. I wasn't inclined that way. And one of the reports I got back from Jerry Colonna, who used to be a good friend of mine, I had worked with him at CBS. He said, "You know what I heard about you? I heard people say, 'Who the hell does he think he is, the male Greta Garbo?'"

Posted by Jeff Winner at 4:49 PM No comments: 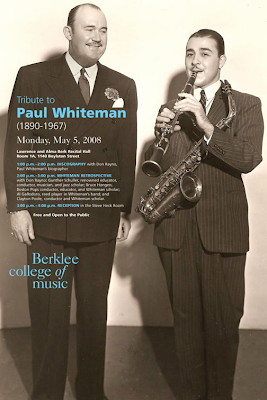 Paul Whiteman loomed large in the 1920s and 1930s. Regardless of how one measures his actual jazz chops (his reputation as the "King of Jazz" was a laughable marketing ploy), he hired and encouraged some of the top talents of his day, including George Gershwin, Bix Beiderbecke, Bunny Berigan, Bing Crosby, the Dorsey Brothers, and composer/arranger Ferde Grofé.

He also worked with and obviously admired Raymond Scott, as The Chesterfield Arrangements will attest. In 1938, for his "Eighth Experiment in Modern Music" (a series that began in 1924 with the public premiere of Rhapsody In Blue), Whiteman commissioned large orchestral arrangements of three Scott tunes: "Mexican Jumping Bean," "Bumpy Weather Over Newark," and "Suicide Cliff." These were performed, with the original Scott Quintette, at Carnegie Hall on Christmas. Besides the RSQ, this spectacular showcase included Artie Shaw, Louis Armstrong, and dozens of jazz and Tin Pan Alley legends in their prime, performing works by Ellington, Gershwin, W.C. Handy, and others. The 1938 concert proved to be the "Experiment" series finale.

Five arrangements from the 1938 concert—including the three Scott titles noted above—will be recreated at the Berklee School of Music on May 5. The concert is part of a day-long tribute to Whiteman.

An afternoon forum, commemorating the 70th anniversary of the Carnegie Hall gala, will include 94-year-old saxophonist Al Gallodoro (who performed at the '38 concert) reflecting on his Whiteman days. A young Gallorodo is pictured above with the legendary bandleader.
Posted by Irwin Chusid at 1:08 AM No comments:

Recently, writer Bill Murphy interviewed Irwin Chusid & me (Jeff Winner) for his new Raymond Scott feature, published in the April issue of REMIX magazine (M83, a.k.a. Anthony Gonzalez on cover). The print copy is attractively designed with vintage photographs, so check out REMIX's tribute to the old, old, old school in a store near you, or read the online version here.
Posted by Jeff Winner at 11:26 PM No comments:

From otsechka.com: Twice a month the music.zine OTSECHKA selects the best Album, Label, Artist and Concert Of The Moment: XXIV :: ARTIST of the moment (17-04-2008): RAYMOND SCOTT: For the first time, Otsechka activates its time machine with purpose to increase the timeless values incorporating not living artists. There is a reason! Born in 1908 he will always be remembered as the mad professor of famous "cartoon music," jazz lover and as an early pioneer, an open minded source and inventor of electronic instruments full of futureness. His "Manhattan Research Inc." is still challenging today's modern music.
Posted by Jeff Winner at 11:25 PM No comments:

Andrew McGraw is a musician, arranger, composer and ethnomusicologist, who has been resident in Southeast Asia, collaborating with artists, dancers and shadow puppet performers. Andy corresponded with me in mid-2007 about arranging Raymond Scott's "Powerhouse" for a native Balinese gamelan ensemble. A few months later, he sent an mp3 of the group's charming, energetic performance. Andy wrote at the time:

I'm in Bali, arranging for the Balinese composer Sudirna. The Cenik Wayah (roughly: "awesome little guys") children's group, in Ubud Village, just recorded "Powerhouse." The kids are between 12 and 15 years old. The tune is performed on a seven-tone gamelan (i.e., flattening out all the chromaticism to seven notes). The Balinese gamelan use paired tuning, resulting in constant quarter-tone "harmonies."

The recording is now slated for June 08 US release on the album Kolaborasi (Porter Records), a collection that features "large gamelan ensembles to peaceful duets of traditional Southeast Asian folk songs." McGraw's arrangement of "Powerhouse" can be heard here.

Posted by Irwin Chusid at 1:12 PM No comments: 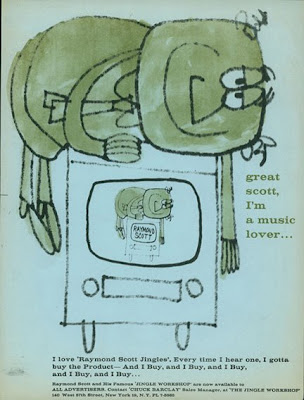 Paper 9" x 12" insert, included with promo-only LP, The Jingle Workshop Invites You To Listen To "Demo-A," a non-electronic "collection of jingles and musical commercials composed and musically produced by Raymond Scott" (ca. mid-1950s). Faded felt-tip line art per the original. If interested in having Scott record for you a charming jingle, contact Chuck Barclay at PLaza-7-5685.
Posted by Irwin Chusid at 10:13 PM No comments: