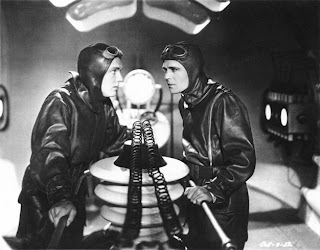 The interesting things one discovers in the Realm of Net via Google Alerts. From today's web-trawl:

Sinking Ship Productions is looking for male actors for our upcoming production, POWERHOUSE. The play will be built collaboratively through research and rehearsal over the course of three to four months. We are particularly interested in actors with Viewpoints, puppetry and/or collaboration experience.

POWERHOUSE will explore the complex artistic life of composer and musical engineer Raymond Scott. The performers will work together with writers and the director to create the play through improvisation, using Viewpoints and found text. We will draw inspiration from his writing, compositions, interviews and other sources, and use a combination of live acting, puppetry and music to tell the story.

Actor/puppeteers in the ensemble will play multiple roles. Swing dancing or puppetry experience a plus but not required for all roles except Raymond Scott. All roles are age-flexible.

More at the link above. Crazy idea. May it succeed.

Perhaps they can get this guy to star as the male lead. All they have to do is ask!
Posted by Irwin Chusid at 5:55 PM No comments:

The Music of Raymond Scott Revisited

Part of the fuseleeds09 (UK) festival—a tribute to Raymond Scott that appears to offer no actual music by the composer:

"Musicians from the Leeds-based musical laboratory LIMA take on the many and varied aspects of composer, musician, bandleader, inventor, electronic innovator, studio genius Raymond Scott in this major project for his centenary year." 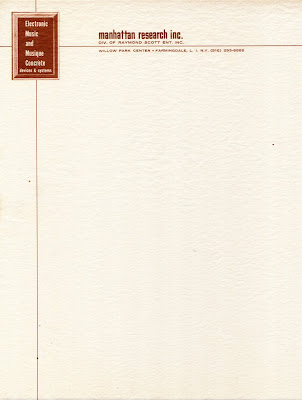 A classy piece of ephemera: blank stationery from Scott's electronic music lab, Manhattan Research, Inc., ca. 1960s. At the time, Scott lived in a Long Island industrial development, Willow Park, Farmingdale, New York. Reams of this stationery were still on hand at the time of Scott's death in 1994. For years my correspondence from Mitzi Scott (then living in Los Angeles) arrived on these sorts of artifacts.
Posted by Irwin Chusid at 7:10 AM 1 comment:

PART THREE: The Case of the Multiple Raymond Scotts

Raymond Scott had a wild imagination, yet the man born Harry Warnow chose a banal pseudonym. A Google search pinpoints plenty of Raymond Scotts who are not our Raymond Scott. Part three of a diversionary series (part 1 and part 2):
Raymond Scott: RENAISSANCE OUTDOORSMAN 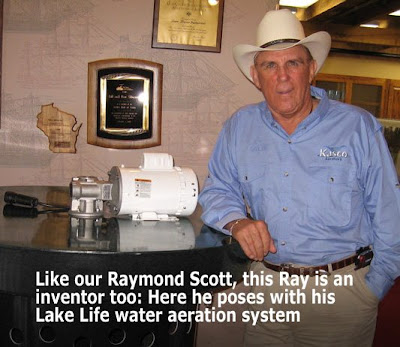 Called "America's outdoor icon" and the "godfather of modern bass fishing," this Raymond Scott has championed the fishing and hunting industry for decades thru magazines, TV shows, and foundations. Yet Ray is preparing to embark on another career—motivational speaker. "I've done everything from manufacture my grandmother's recipe for chow-chow (a type of relish) to inventing my own LAKE LIFE pump (a water aeration system) to protect my personal bass lake," the p/t inventor explains. His new speaking career has him pumped! "I can't remember the last time I have been so excited about a new direction. It's a perfect fit at this stage of my career." Told he's been called "the Dale Carnegie and Zig Ziglar of the outdoor world," Scott accepts the compliment. His motivation is simple: "I've got a story to tell. I can help people." And for your safety: The Mustang Survival Deluxe Inflatable Personal Flotation Device.
Posted by Jeff Winner at 8:27 PM 1 comment: 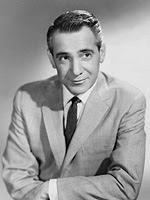 With the possible exception of the oft-recorded "Mountain High, Valley Low" from the 1946 Broadway musical Lute Song, Raymond Scott's best-known compositions are instrumental. Defiantly so, one might say. His oddly juxtaposed passages, schizoid tempos and abrupt transitions don't lend themselves to songcraft. But that didn't deter one legendary Tin Pan Alley scribe: Jack Lawrence.

Lawrence has a monumental catalog: "All or Nothing at All," "Ciribiribin," "If I Didn't Care," "Poor People of Paris," "Sleepy Lagoon," "Sunrise Serenade"—you get the picture. Not exactly a one-hit wonder.

But Scott's publisher got the bright idea that some of the composer's more appealing instrumental hits could be born-again chart-toppers if re-targeted for the 1940s karaoke market. Lawrence tried to make these novelties singable: "Boy Scout in Switzerland," "Huckleberry Duck," and "In an 18th Century Drawing Room." The Andrews Sisters recorded "18th CDR" and the Scott archives contain radio airchecks of lesser-knowns performing the other two. Heard them? We have—and cringed. They don't add much to Scott's legacy, and it's doubtful they do much for Lawrence's. These vocal versions remain justifiably obscure.

Nonetheless, happy birthday Jack — born this day in 1912.
Posted by Irwin Chusid at 12:01 AM No comments: