A Canadian named Adam O'Callaghan, based in Montreal, has embarked on the obsessive pursuit of an ambitious, unprecedented cross-genre concert tribute to Raymond Scott. The production is six weeks away. Some basics:

An interdisciplinary student production celebrating eccentric composer, inventor and bandleader Raymond Scott (1908-1994), in observance of this year's centennial. The concert features participants (70+) from the Concordia University Jazz and Electroacoustic Studies programs (with special guests) recreating material from all periods of Scott's prolific career. Includes novelties from his 1930's and 1940's chamber-jazz quintets; overlooked orchestral works from his 1940s dance/concert bands; and selections from his after-the-cool Secret Seven ensembles. Also, performed for the first time in public, works from the groundbreaking electronic releases Soothing Sounds for Baby and Manhattan Research Inc. (In the electronica phrase of his career, Scott worked primarily in audio labs, not onstage.)

The show will also feature world premieres of Scott obscurities, as well as choreography by students in Dance, Theatre and other Concordia University Faculty of Fine Arts departments. The program is being produced with the cooperation of the Raymond Scott Archives and RaymondScott.com.

Poking thru the Scott Archives 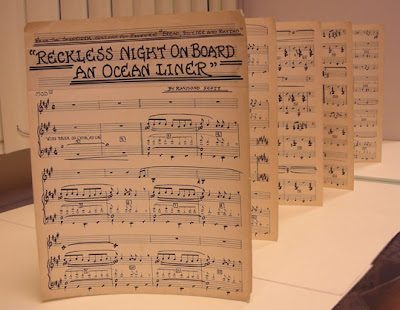 Found in the Special Collections division of the Miller-Nichols Library, University of MO @ KC, where sixty years of Scott memorabilia has been preserved since 1995. Downstairs in the library's Marr Sound Archives you can find Scott's recorded legacy (2800 discs and 500 tapes).

Written at top: "From the Twentieth Century Fox Picture 'Bread, Butter and Rhythm'"—then crossed out. Ca. 1937. If the film was produced, the web doesn't know about it.

HT: Jeff Winner
Posted by Irwin Chusid at 9:33 AM 1 comment:


Raymond Scott's 1937 "Powerhouse" recruited for another soundtrack:
Posted by Irwin Chusid at 7:16 PM No comments: