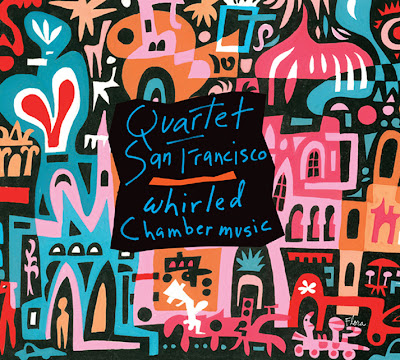 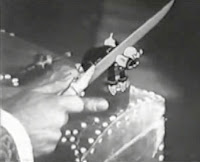 Now THAT'S entertainment.
Posted by Irwin Chusid at 1:40 AM 2 comments: 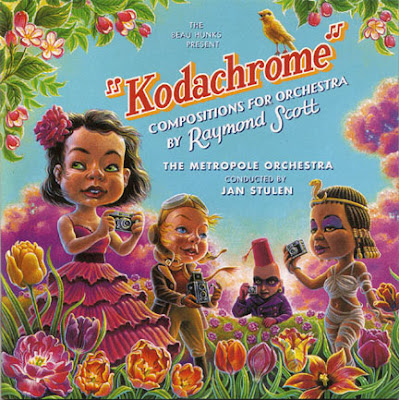 Kodachrome (released on Basta in 2002) was, as the subtitle noted, a collection of "Compositions for Orchestra by Raymond Scott." The album was produced by Gert-Jan Blom (founder of The Beau Hunks), and features the Metropole Orchestra conducted by Jan Stulen.

This repertoire reflects a little-known side of Scott: serious orchestral composer with an idiosyncratic flair. Scott was a renowned big band leader in the early 1940s, but the tunes on Kodachrome are not Swing Era chestnuts. Most of the titles were, by Scott standards, obscure; none had been hits for the composer, and none were featured in cartoons or films. Dating from the 1930s, '40s, and '50s, some had never been commercially released (e.g., "City of New York," "Minor Prelude," "Dreary Weather on Sixth Avenue," and "The Bullfighter and His Piccolo"); others had been released without fanfare or commercial success (e.g., "Naked City," "Symphony Under the Stars," and "Secret Agent"); and a few were radio rarities (e.g., "Rococo," "Hertz Theme," "Confusion Among a Fleet of Taxicabs Upon Meeting With a Fare"). Scores do not exist for many of these titles; performance transcriptions were made from archival recordings by members of the Metropole.

The magnificent cover was illustrated by Kellie Strøm. Here's a rough sketch from the artist: 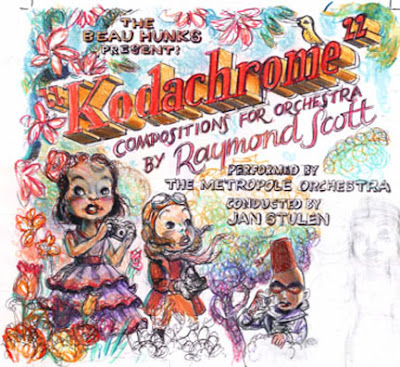 Posted by Irwin Chusid at 9:54 PM No comments: