Layne Weiss recently wrote a fine article for the L.A. Weekly about Raymond Scott's electronic music years. The online version can be read at "Can Synthesizers Compose Music? Nearly 50 Years Ago, This One Could."


Layne Weiss: When and where did Raymond Scott develop his Electronium?

Jeff Winner: Raymond had been developing Electroniums out of the public eye throughout the 1950s. He moved to L.A. in 1971. He was nearing his mid-60s, had lived his life in New York, and was willing to make a major transition at that stage. He had his third wife, Mitzi, and this was like a whole new start. It ended up being his final professional gig because his health declined during the period.

LW: How long did he work before his health started declining?

JW: He started having heart trouble much earlier—in the 1950s. Later he had a stroke and heart attacks. The span of his Motown tenure was about 7 or 8 years from the time he started working for them under contract on Long Island, through moving west and getting a full-time position with Motown. They retired him around 1977 because of his health.

LW: When did he start working for Motown and how did he transition to L.A.?

JW: In 1969 he started to publicize the Electronium. In 1970, Motown owner Berry Gordy and his entourage arrived at Scott's Three Willow Park facility in Farmingdale, Long Island, to see a demonstration of what was, at the time, Scott's state-of-the-art Electronium.  Gordy was so impressed that he said, “Here’s a check for $10,000 to get started and build one for me.”  That one that you see in the color photograph with the beautiful wooden cabinet—that’s the one Raymond made specifically for Motown. 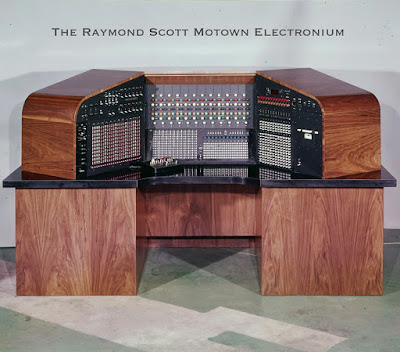 When Gordy ordered the Motown Electronium, he stipulated that it was his exclusive thing. Raymond was not allowed to publicize the deal. He couldn’t even put out a press release declaring that he was employed by Motown. Gordy did not want word to leak out that hits were being generated by robots. Raymond was disappointed about that.

LW: When did all this info start coming out?

JW: It was known prior to Scott's death but hadn’t been explored in detail. We’ve made attempts over the years to reach Gordy for comment, but we’ve received only polite declines. Hopefully someday that will change. We would love to know how he looks back on it now.

LW: How did the other Motown artists react or warm up to Scott being there?

JW: Some of the studio musicians — when they attempted to play along with the machine, they didn’t like it. They resented being told to play to a click-track. Musicians rely upon their own internal metronomes, their own sense of rhythm—and these guys were amazing instrumentalists. For them to be asked to subordinate their talent to a machine, to let the machine be a leader, some resented that. On the other hand, Michael Jackson was fascinated by the Electronium and wanted to use it. He thought it was the future. And he was right.

Others? We don’t know. We don’t have any evidence. But we know they were all working at the same facility and we presume that everybody was at least given the opportunity to utilize the technologies that they were bringing in. This all goes to a broader wave of technology. Motown had the best recording equipment. As a new decade was dawning, there was buzz about this new thing called a "synthesizer." In 1970 Bob Moog introduced the Minimoog to the consumer market. Now you had a mobile synth. It could go from city to city on tour for the first time. That was the year when the revolution really coalesced in terms of technology, availability, price and mobility. It’s probably not a coincidence that Gordy was so turned-on by the Electronium at the same time.

LW: Do you have any examples of artists that weren’t thrilled by working with Scott or his Electronium.

JW: Hoby Cook, an engineer, was assigned to record session musicians playing along with the Electronium. He provided an interesting chronicle of the musicians rebelling against the experiment. We don’t know of any high-profile names who were not into it. People have speculated that Stevie Wonder would be a logical candidate to use it because he loves synthesizers. I don’t think he was a great prospect. For one thing, he’s blind and probably couldn't operate it. Second, the main purpose of the Electronium was to come up with its own bass-line, grooves, melodies, and rhythms. The last thing Stevie Wonder needed was help generating musical ideas.

LW: Scott was not very sociable and he created a lot of his devices so he wouldn’t have to deal with people. What was it like for him having to meet people and demonstrate how this stuff worked?

JW: He was fine with that — as long as there was something technical as a conduit. He was probably in his element at Motown. He respected them, and they respected him. They were fascinated by the technology and he was the grand wizard who was trying to give them the keys to the future. He taught studio staff at Motown how to help musicians use the device, so he wouldn't have to keep doing it. He was happier in that later stage of life because he was doing what he really wanted to do. He explained that in a letter to a fan in 1980. He said it was the most enjoyable time of his life, working with electronic instruments and electronic music.

LW: Do you know how his family felt about relocating?

JW: Mitzi, his third wife, loved him tremendously and she would have done anything he wanted. It was a lot of work for her because he was so busy — it fell on her to return to Three Willow Park to close down the facility. He had tons of equipment, and tape reels, and she had to sell some of it. Some stuff got thrown away and the rest of it she had transported to L.A. They rented a furnished apartment while Gordy and Raymond worked at Gordy’s house. He had an amazing estate in Bel-Air. They set up a laboratory above the garage, and then it all got moved to the Motown facility. Mitzi and Raymond eventually settled in Van Nuys. After Raymond passed in 1994, Mitzi moved to Santa Clarita. Raymond stayed in California for the rest of his life. He loved the weather and taking long drives through the mountains and near the coast.

LW: Was he star-struck at all?

JW: Not at all. He'd been a celebrity since he was young. He wrote his first hit tune at age 25. His older brother was a CBS radio star before he was. He rubbed elbows with everybody from Sinatra and Crosby to Smoky Robinson, Michael Jackson and Diana Ross. He collaborated with Jim Henson. He was part of the 20th century entertainment industry. There were artists he admired, but the idea of him, say, asking for an autograph seems unfathomable. He was a celebrity himself, but he didn’t go out and party with other stars. He was a recluse who focused on work.

LW: Were Raymond and Gordy friends or was it just professional?

JW: They got along great. Raymond was at his house from 9 to 5 every day. They were close the first couple of years. Gordy was aware of Scott's early career as a hit-maker, starting in the 1930s. Gordy was aware that he was getting not just a technological wizard, but a guy who knew how to compose hit tunes. And of course Scott was aware of Gordy’s amazing accomplishments. In the 1960s Motown was unstoppable. They dominated the pop charts. Even in the ‘70s they continued to be potent with the Jackson 5, Diana Ross, Stevie Wonder, Earth, Wind & Fire, and Marvin Gaye.

LW: How about some info on the new album, 'Three Willow Park'?

The non-working Motown Electronium was purchased in 1996, a couple of years after Scott passed away, by Mark Mothersbaugh of Devo. He’s also a successful film composer. He's done Wes Anderson movies and Disney projects, such as The Lego Movie. Mark kept the Electronium in his L.A. studio for a long time. It was moved to Portland for restoration. It’s now coming back to L.A. because a new restoration attempt is being undertaken by Brian Kehew. Among many other roles, he’s a keyboard tech for The Who. He’s working with Wally de Backer (a.k.a. Gotye), who’s providing financial assistance.
Posted by Irwin Chusid at 7:30 AM