Layne Weiss recently wrote a fine article for the L.A. Weekly about Raymond Scott's electronic music years. The print version, genuflecting to Thomas Edison, bears the clever title "The Wizard of Willow Park." The original online title, "In the '70s, Motown Hired a Synth Wizard to Build Them a Songwriting Machine," was later changed to "Can Synthesizers Compose Music? Nearly 50 Years Ago, This One Could."

Weiss interviewed me two months before the release of Three Willow Park, the new 3-LP/2-CD collection of vintage, previously unissued Scott electronica, which I co-produced with Gert-Jan Blom (with Jeff Winner as Associate Producer). Weiss conducted many interviews, and editorial space invariably limits each respondent to a few choice quotes. Below are the full replies I sent to Weiss, provided here for additional background on the development of Three Willow Park.

Layne Weiss: Why is now the time to release this project?

Irwin Chusid: Because we finally finished it. The followup to Manhattan Research Inc. (released in 2000) was long overdue, but for a number of reasons, was repeatedly postponed. The additional time made it a better project because we were able to collect more material and construct a more detailed chronicle about Scott’s years at Three Willow Park Center. 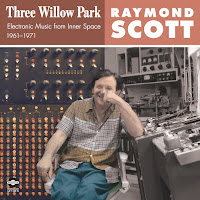 LW: What should listeners expect as far as sounds, music, and content, and why is this release special for Raymond's family, you, Gert-Jan, Jeff, and for music fans in general?

IC: It’s different than MRI. For one thing, it features the sounds made on Scott's Motown-era Electronium, which was the "Mark 2," refined version. There was no "Mo-tronium" on MRI. An earlier, less-refined incarnation was featured. That album also included dozens of early TV and radio commercials with electronic music and effects soundtracks. There are no commercials on 3WP, although there are a handful of sound effects from ads. 3WP features a wide array of music and sounds. Some are accessible and pleasant. Others will peel layers off your cerebral cortex. We tried to program the tracks for constant surprises. Everything we used we consider listenable. There's something for everyone, but we can’t guarantee that everyone will enjoy it all. The moods range from relaxing to brutal.

LW: Can you explain the significance of the title? Maybe give some insight on Raymond's life at Three Willow Park or just explain what it was and why it's so important.

IC: Number 3 Willow Park Center was a large rental bunker in an industrial development in Farmingdale, New York. Built in the early 1960s, Willow Park Center was a patch of suburban real estate where corporations based headquarters, small companies leased office space, and manufacturers kept warehouses. Sometime after the summer 1964 demise of his marriage to singer Dorothy Collins, Scott moved to Willow Park to set up his electronic music lab. When I say "moved," I mean "moved in." He lived there. Residential occupancy wasn't legal under local zoning regulations, but Scott paid his rent and outfoxed the lease police. It was at Three Willow Park that he built the Electronium. He was living there when he met and married his third wife, Mitzi—who besides cooking his meals, kept his books and learned how to solder circuitry. She’s an important part of the story, and there’s a photo of her on the back of the LP set. This makeshift compound remained Scott's atelier and bedroom until around 1971, after which Raymond and Mitzi decamped for Los Angeles, where he went to work for Berry Gordy at MoWest.

IC: It's a nice, tidy decade. The earliest tracks we considered date from 1961. Anything earlier was on MRI, whose oldest track dates from 1953. The recordings on 3WP end at 1971, because in 1972 Scott went to work for Motown. Gordy hired him to develop the Electronium—which composed by itself using programmed intelligence—as an "idea generator." In particular, the Electronium was great at improvising complex melodies and rhythms. While Scott was employed there he was under a strict gag order. Motown contractually prohibited him from publicizing the nature of his employment. They were worried that their fans might think that Motown’s instrumental stylings were being performed by “Mo-bots.” As far as we know, the Electronium was never used on any Motown recordings, but we know that a young Michael Jackson would occasionally drop in Scott’s on-site studio to watch the device work. We don't have a direct quote, but someone who worked there with Scott said Jackson was quite excited by the machine's possibilities.

LW: Has this music been previously unheard by the public? How do you feel about releasing it?

IC: 98% of the music on 3WP has never been publicly circulated, altho a few pieces have been played on the radio or previewed for inquiring journalists.

LW: Where will people be able to buy it?

IC: Anywhere fine music is sold. We have expressly forbid it to be sold where bad music is purveyed.  3WP will be available as a 3-LP set, 2-CD package, and digital. We will also offer a free 349-page downloadable pdf consisting of documents, photos, and ephemera chronicling Scott’s career in electronic music and engineering.
Posted by Irwin Chusid at 9:39 PM