Hungarian-born composer/percussionist Gábor Tarján, who lives in the Netherlands, arranged Scott's "War Dance for Wooden Indians" for an unusual ensemble. He recently provided us with video of a June 2010 performance, and the following notes:


The group does not actually have a name (as yet). I brought these musicians together for a project entitled "Tap 'n Tabla." The video was recorded at the Vredenburg Concert Hall, Utrecht, Netherlands. I'm playing marimba.

Scott's music has been an inspiration ever since I heard a recording of "Siberian Sleighride" on the radio years ago. I couldn't believe what I was hearing and fell in love with the music right away. It's a very controlled sort of chaos, and I love that Scott is basically just playing with all these notes. The music also has an openness. I can imagine many of his pieces being arranged for a wide array of different formations. The possibilities are endless!

Next week, I'm trying out a new (perhaps a bit bizarre) arrangement of "Powerhouse" for female vocals, marimba, bass guitar and tabla.

The others players in the video are Sandip Bhattacharya (tabla), Peter Kuit (tap dance), Yamila Bavio (sax), Frans Cornelissen (tuba), and Rembrandt Frerichs (piano).
Posted by Irwin Chusid at 8:30 AM No comments: 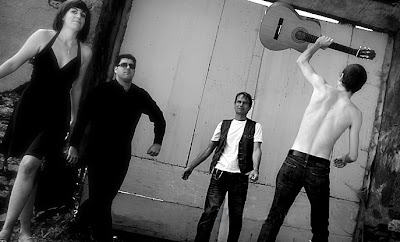 The Montreal-based guitar foursome Quatuor Mains Libres have recorded tasty arrangements of Scott's "The Penguin" and "Powerhouse." You can hear the latter at their website and then buy it in iTunes on their EP Eponyme. "Penguin" will appear on their forthcoming first full-length album.
Posted by Irwin Chusid at 11:13 AM No comments:

When producer and Scott authority Irwin Chusid formed the 7-piece RAYMOND SCOTT ORCHESTRETTE in 1999, his only stipulation to the musicians was: 'don't replicate the original Quintette.' The late control-freak composer might not approve, but the Orchestrette has performed radical reconstruction on his compositions.   Besides such animated favorites as "Powerhouse," "The Penguin," and "Twilight in Turkey," the Orchestrette repertoire includes lesser-known, non-cartoon works such as "Coming Down to Earth," "Naked City," and "A Street Corner in Paris." The Orchestrette also performs acoustic renditions of Scott's later electronic works — such as Soothing Sounds for Baby's "Little Miss Echo" — rarely heard artifacts the composer himself never performed outside the studio.   The impishness and splashy colors of the originals remain, but these are all-new takes on an old master.
Watch this video slideshow of photos with music that tells the story of The Orchetrette's concert at LINCOLN CENTER in NYC in December of 2011, to celebrate the 75th Anniversary of Raymond Scott's classic tunes. >>> See it on: YouTube (or browse the photo album: here) And listen to 2 tunes here:


The ORCHESTRETTE:
WAYNE BARKER (piano, melodica, arrangements) composed the Tony Award-winning Peter and the Starcatcher, which earned him a Drama Desk Award and a Tony Award nomination. He performed and toured worldwide with Dame Edna Everage for over five years; he wrote music and appeared as Master of the Dame’s Musik for Dame Edna: Back with a Vengeance, and contributed to All About Me, starring Dame Edna and Michael Feinstein. Barker composed for The Three Musketeers and Twelfth Night at Seattle Rep and The Great Gatsby and The Primrose Path at the Guthrie Theater, and orchestrated Mark Bennett’s score for A Midsummer Night’s Dream at La Jolla Playhouse. He has written dozens of symphonic pops arrangements for New York Pops, Los Angeles Philharmonic, Minnesota Orchestra and the Baltimore, Chicago, San Francisco and St. Louis symphonies. He was music director for Shakespeare and the American Songbook (92nd St. Y); Into the Woods and She Loves Me (Westport Country Playhouse); and A Little Night Music,  Caroline or Change, and The Boys from Syracuse (Center Stage, Baltimore). Barker is artistic associate for new musicals and composer–in–residence at New York Theatre Workshop.
BRIAN DEWAN (electric zither, koto, piano, accordion, vocals, arrangements) has worked with the Liverpool Cathedral Bell Ringers, the Pagoda Chinese Children's Orchestra, the Orchestra of St. Luke's, and Kris Perry's Machines. His albums include Tells the Story, The Operating Theater, Words of Wisdom, and Ringing at the Speed of Prayer.
MICHAEL HASHIM (alto & soprano sax) studied with Albert Regni and Phil Woods, and was mentored by Benny Carter and Jimmy Rowles. He was the Widespread Depression Jazz Orchestra's music director and star soloist, and has played and recorded with Dizzy Gillespie, Muddy Waters, Nancy Wilson, The Village People, Gatemouth Brown,  Sonny Greer, and others.  Hashim was awarded an NEA Performance grant and toured China and the Middle East, playing most of the world's major Jazz and Music Festivals in 20 countries on five continents. His credits include ten recordings as a leader and nearly 100 as a sideman. As a composer he has earned commissions from PBS Playhouse, Oberlin Conservatory, and the NY Times OnLine.
WILL HOLSHOUSER (accordion, arrangements) When Will was a young music student, a friend gave him a musty old accordion, for which he soon began transcribing and learning various types of music. Over the next twenty years he developed his own sound as a player, improviser and composer. Three CDs of Will’s trio music have been released by the Portuguese label Clean Feed. He leads the band Musette Explosion, which revisits French accordion and guitar music, and composes for film, dance and various ensembles. He has performed on several continents and recorded with violinist Regina Carter and with clarinetist David Krakauer. Will has also worked with Antony and the Johnsons, Matt Munisteri, Martha Wainwright, Andy Statman, Mark Morris Dance, New York City Ballet, and others.
GEORGE RUSH (upright bass, tuba) has performed and recorded with such rock artists as Lloyd Cole, Ben E. King, David Johansen, Natalie Merchant, Amy Rigby, Dr. John, Martha Redbone, Vernon Reid, Richard Davies, Hem, and Japan’s Pizzicato 5. Rush's jazz credits include performing with Randy Brecker, Don Byron, Craig Handy, and Steven Bernstein. As a tuba player, Rush has performed on critically acclaimed children’s albums by ex-Del Fuego Dan Zanes. George's Broadway pit credits include The Full Monty, Jesus Christ Superstar, Caroline or Change, Chicago, The Color Purple, and the off-Broadway cult smash Hedwig and the Angry Inch.  He was charter bassist for the Losers Lounge pop tribute series, has worked extensively with the Big Apple Circus, and his studio work is heard in the Sundance Channel documentary series Iconoclasts.
ROB THOMAS (violin) occupies the violin chair in The String Trio of New York. He has toured and recorded extensively with that venerable jazz chamber ensemble, as well as The Mahavishnu Project and the Jazz Passengers. He also appears on recordings by Lee Konitz, Andy Summers and Marc Ribot.  Rob is a professor of jazz strings at Boston's Berklee College of Music
CLEM WALDMANN (drums) has long been the house drummer for the popular New York-based Loser's Lounge tribute series. He has performed and/or recorded with the bands They Might Be Giants, the Kustard Kings, Ui and Baby Steps, and for solo artists Laura Dawn, Elizabeth Mitchell, and Richard Davies. Clem also served as percussionist in (and recording artist with) the long-running theatrical production Blue Man Group.

Posted by Jeff Winner at 2:15 PM No comments: