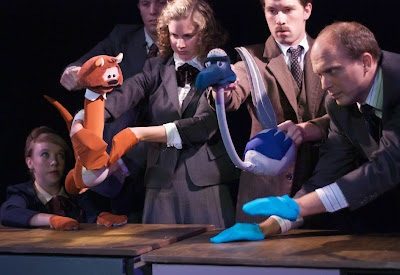 Sinking Ship Productions, who staged a spectacular (and acclaimed) Raymond Scott musical biography entitled Powerhouse at last year's NYC Fringe Festival, are presenting a staged reading of their revised script next Wednesday in New York. (Update: We had originally posted that the reading is open to the public. We have since learned that the reading is an industry-only event intended to attract financial support for a planned full staging. We retained the post because we like the above photograph.)
Posted by Irwin Chusid at 7:04 AM No comments: 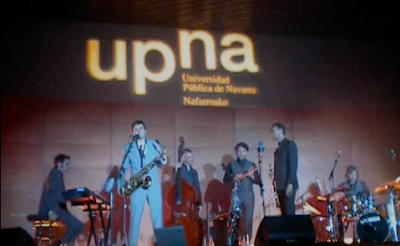 Miguel Malla, the band's tenor saxophonist, informs us that on Friday Racalmuto begins recording their second CD. Their self-titled first contained a half-dozen RS compositions performed with the élan of the original RSQ. Album two will feature Scott's "Snake Woman," "Bird Life in the Bronx," "Sleepwalker," "Suicide Cliff," "A Little Bit of Rigoletto," "Oil Gusher," "The Quintette Plays Carmen," "The Girl with the Light Blue Hair," and "Tobacco Auctioneer." They'll also record "Brass Buttons and Epaulettes," which Scott didn't compose, though it was performed by the RSQ in the 1938 Shirley Temple film Just Around the Corner.
Posted by Irwin Chusid at 9:01 PM No comments: 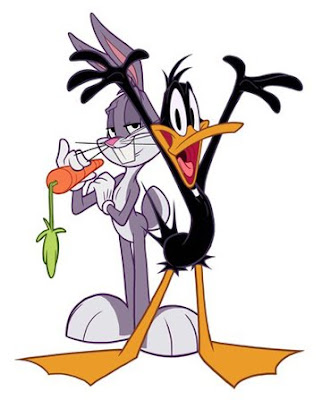 Warner Bros. has announced plans to produce new TV and theatrical cartoons featuring Bugs, Daffy, Sylvester & Tweety and their cohorts. WB apparently feels compelled to roust the company's legacy luminaries out of their gated retirement communities and foist them on unsuspecting hordes of Justin Bieber fans. Wanna bet the violence and mayhem will be less … violent? We can just imagine the PC Police getting their hands on old Tex Avery scripts and red-penciling certain strains of insensitive behavior.

When this New York Times article appeared last week, someone in the Scott family asked me if Warner might use Raymond Scott music in the soundtracks. I'm not optimistic. When WB peppered their classic 1940s and '50s 'toons with RS themes, they owned Scott's publishing (under their Advanced Music publishing arm). Modest user fees were paid from the Warner film division to Advanced, but I'm sure there was cooperation and that requests for usage were pro forma. In fact, all non-Carl Stalling compositions adapted for the classic Looney Tunes and Merrie Melodies from the 1930s thru the 1960s were owned by one of Warner's publishing affiliates (Remick, Harms, Witmark, or Advanced).

When the Scott copyrights reached the 28-year renewal term (since extended by law) in the early 1960s, US rights reverted to the composer, and title by title the catalog began slipping out of WB's grasp. The last instance of a Scott melody ("Powerhouse") heard in a WB score (Sheep in the Deep) was in 1962. In 1964, Scott sold the catalog to Music Sales Corp.

In the 1980s, a friend of ours was hired to direct new WB 'toons with the classic characters, and he tried to include a few Scott melodies for historical continuity. He was given budgetary grief from the executive suites and managed to prevail in only a few instances.

Music Sales knows about this project and will make an attempt to place Scott's melodies—especially "Powerhouse." But it will all come down to whether the studio considers it worth the expense. I suspect licensing non-WB music will be a distant consideration.
Posted by Irwin Chusid at 12:51 AM No comments: 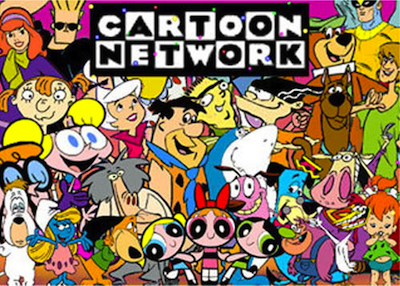 Cartoon Network's round-the-clock bumper theme from 1997 to 2004 was Raymond Scott's classic "Powerhouse." Watch >>This montage presents more than 300 bumpers that Primal Screen produced for the network's programming. The montage's music bed is an arrangement of "Powerhouse" commissioned by the network. Long and short versions are available on the 1999 Rhino/WEA CD Cartoon Medley.
Posted by Jeff Winner at 7:30 AM No comments:

The Rivertown (New York) Film Society is featuring DECONSTRUCTING DAD, the new Raymond Scott documentary, on Friday, May 21, at 7:30 pm. There will also be a Q&A with director Stan Warnow, and admission is free. More info: here

Posted by Jeff Winner at 2:58 PM No comments: The new Raymond Scott documentary, DECONSTRUCTING DAD, will be featured at the Park City Film Music Festival: "a ground-breaking event dedicated to all aspects of music in film — from music-based documentaries, to music videos and feature films that use music as an essential element." The documentary is being shown at the Egyptian Theater in Park City, Utah, on Wednesday, May 19th, at 6:15 pm, and director Stan Warnow will attend. Details: here 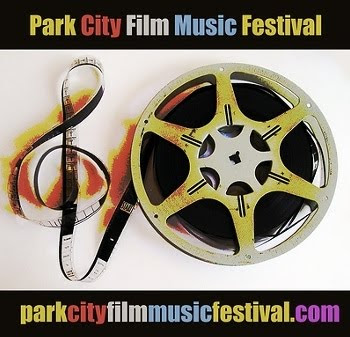 Although best-known as writer and narrator of the classic 1983 holiday movie, A CHRISTMAS STORY, Jean Shepherd began a long radio career in 1948. He was not a traditional DJ who kept silent while playing records; he was a monologist who carefully chose music beds to underscore his unique narrative style. At least twice he pontificated over Raymond Scott:


• In 1965 Shep, fascinated by Scott's SOOTHING SOUNDS FOR BABY electronic lullaby series, built an entire program theme around it, according SSFB perhaps its only airplay until the CD reissues more than 3 decades later: listen here.

• The following year, Shep delivered one of his trademark rants about amusement parks as he spun "In An 18th Century Drawing Room," which Scott composed in 1937: listen here.

Although Raymond Scott designed and built several versions of his automatic composing-performing machine, The Electronium, the only surviving model was one commissioned by Berry Gordy for Motown. Following Scott's death in 1994, the non-functioning instrument was purchased by Mark Mothersbaugh, who promised to restore it. That resurrection is now being attempted by engineer Darren Davison.
Posted by Jeff Winner at 11:37 AM 7 comments: "In a bittersweet paean to his late father, the director has taken great pains assembling a visual and aural composite of his subject. Beneath the music, what remains is a son desperate to rediscover the father who was lost to the machines."

Posted by Jeff Winner at 9:00 AM No comments: