Down to Earth—and leaving it 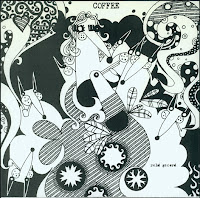 One of my favorite Raymond Scott compositions—and one of his few genuine pop songs—is "Coming Down to Earth." Scott composed it in 1936, before launching his seminal Quintette, but didn't record the tune until 1953, when it was released as a post-WWII orchestral period piece.

Rochester-based musician Dave Cross belatedly introduced me to the virtues of "Earth." Having heard only the nondescript RSO version, I couldn't understand why Cross cared enough to record the tune with his avant-weird band, Coffee, in the mid-1990s. Cross eventually sent a small stack of 7" singles with a skeletal but jaunty slide guitar take of "Coming Down to Earth" slotted between two Coffee originals. The arrangement (which clocked 1:06) was so radically different from Scott's, it was barely recognizable as the same composition. Yet Coffee retained the melody and structure, which gave me a deep appreciation of this pop gem.

The group later recorded a spooky synth cover of another little-known Scott 1950s orchestral work, "Naked City." I loved these recordings because they didn't attempt to recapture Scott's style; they reinvented Scott in a strikingly original way. Because of these imaginative takes, Coffee were invited to perform at the second (and last) multi-artist Scott tribute concert at New York's Bottom Line in 1997. (R. Stevie Moore joined them onstage.)

Several years ago I learned that Cross was undergoing treatment for a brain tumor. Phillip Marshall, one of his Coffee-mates, dropped me a note Saturday evening:

Dave Cross lost his seven year battle with a brain tumor last Friday. He was instrumental in getting "Coming Down to Earth" recorded by Coffee, which was really a duo of Dave and Tim Poland.

Dave wasn't much of a musician per se. However he was wildly creative with sound and with organizing Coffee events. He flagged me down 10 years ago because he had received the sheet music of "Coming Down to Earth" from you. (I had my brush with fame playing guitar with the wonderful Colorblind James Experience.) Neither he nor Tim could read music so they had me figure it out. Dave had the impression that no recording of the song existed. I had no idea of Scott's intentions with the piece, and I heard it as a whimsical yet sentimental ballad.

When Coffee was invited to play at the Bottom Line, they again recruited me for guitar. We played "Down to Earth," "Caterpillar Creep" and "City of New York." The Raymond Scott songs were the only remotely tuneful or melodic music Coffee ever played.

Dave will be missed but his spirit will be present anytime a creative person responds to the urge to reach beyond their own limitations and make something happen.

There will be a memorial service in Penfield, NY on Tuesday, May 1 at 11:00 am in Linear Park where Dave always found fishing quite good.

Our condolences to Dave's family and friends. We hope Coffee's two Scott covers make it to CD release. They were among the first new recordings to demonstrate how Scott's vintage music could be revitalized for the 21st century. 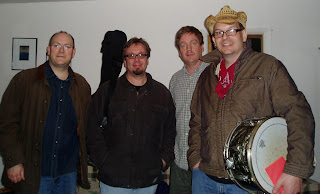 The Happy Farmers (named for a Scott tune) were formed a year ago to support Dave when things were going badly for him. True to form, Dave forged on for another year! L to R: Adam Wilcox, upright; Phil Marshall, guitar; Tim Poland, guitar; Dave Cross, snare and cymbal. 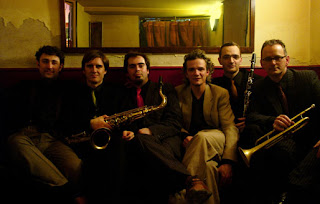 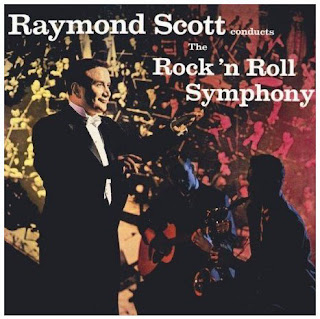 Raymond Scott fan Fernando saved an email I'd sent him years ago, in response to his curiosity about future reissues of vintage Scott recordings. He reminded me of this excerpt:


I don't know who owns rights to The Rock 'n Roll Symphony (a.k.a Amor) which I have never inquired about. It's my least favorite RS project. I hope it never gets reissued. I'll put a price on the head of anyone who attempts it.

Well, someone hasn't merely attempted to reissue R&RS—they've done it. Don't know whose idea it was, but a pox on their house, head, and genitals. Just for the record: no one connected with the Scott family or business interests—which includes me and anyone else whose name has been prominently connected with reviving Scott's legacy over the past 15 years—had any involvement with this turkey. All blameless.

I'm not saying that you (by which I mean YOU) won't like R&RS. I'm just saying that if YOU love Raymond Scott recordings which have been reissued on CD since 1992, then YOU won't like R&RS. It isn't "rock and roll," and it's not a "symphony." It contains no Scott compositions. It's a tepid bath of Mantovani-styled orchestral yawners. It's soulless, and its utility can be summed up in one word: landfill.

Of course, we are receptive to being convinced otherwise! Until then, R&RS is not recommended, and we'll post no purchase links. Yes, we could have ignored it rather than bring it to public attention. But it was considered worthy of ridicule.

UPDATE: Jeff Winner of RaymondScott.com dropped us a note:


I just remembered an email received years ago that read, "I recently bought a scratchy copy of Rock 'n Roll Symphony at a thrift store for 50 cents. Can you tell me how much this album might be worth?" I forwarded it to you, and you replied, "If I give you another 50 cents, would you scratch it up even more?" He came back, "But it has such a snappy cover! Are you saying the 50 cents I paid for it was too much?" And you shot back, "Original editions had a wooden dowel in the spine. Whittled down for toothpicks, they would justify the expenditure."

Posted by Irwin Chusid at 7:24 PM No comments:

Nothing so much as the future ...

Scott 'toonsmithery and electronica keep popping up as insta-cachet soundtracks for YouTube uploads. None authorized, some fascinating, a few head-scratchers. We link, you decide:

A series of psychedelic DNA chains—or something—set to Scott's "Cindy Electronium" (from Manhattan Research, Inc.) by, on, or from kuantika tv.

Goyoelpollo (Goyo the Chicken) has produced a nifty audio-visual montage for MRI. Or perhaps someone else did the vid and Goyo posted it. Nuestro español es mediocre—if you can provide a reasonable translation, please share. 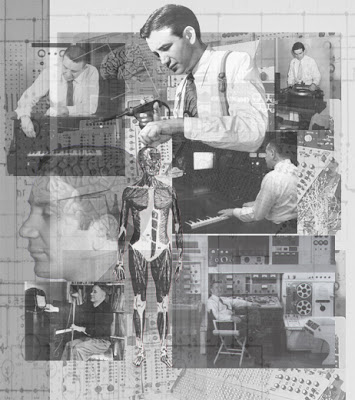 Raymond Scott's electronic music productions from the 1950s thru the 1980s have achieved greater public recognition since the artist's death in 1994 than they did during his working life. In 1997, his 1964 infant lullabyes, Soothing Sounds for Baby, made their CD debut to wide critical acclaim. Manhattan Research, Inc., a 2-CD set of vintage Scott electronica, received an equally warm welcome upon its release in 2000. MRI's long-awaited sequel, covering the early 1960s thru the late 1970s, is planned. The as-yet untitled collection will be co-produced by Gert-Jan Blom and Jeff Winner.

Ergo Phizmiz, who hosts The Phuj Phactory on WFMU radio, is editing together an hour of Scott electronica reinvented by today's DJs, mixologists, and technophiles. The program, entitled "Cyclic Bits: The Raymond Scott Variations," airs Wednesday, May 16, and will feature Frankenscott creations by:

The contributors were granted permission to use samples from MRI and SSFB, and the program will be garnished with extracts from Scott's original recordings. An album of the full remixes might be released later. montage by EsoTek
Posted by Irwin Chusid at 10:59 PM No comments: