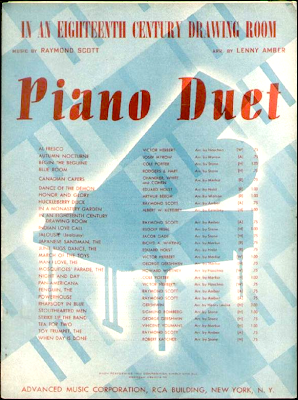 In 1943, LEONARD BERNSTEIN wrote this piano duet arrangement of Raymond Scott's 1938 hit tune, "In An 18th Century Drawing Room," published under Bernstein's pseudonym Lenny Amber. (Bernstein is a German and Jewish name meaning "amber.") Bernstein, who, according to THE NEW YORK TIMES, was "one of the most prodigiously talented and successful musicians in American history," also arranged versions of Scott's classics, "Huckleberry Duck," "The Toy Trumpet," "The Penguin," and "Powerhouse," seen below: 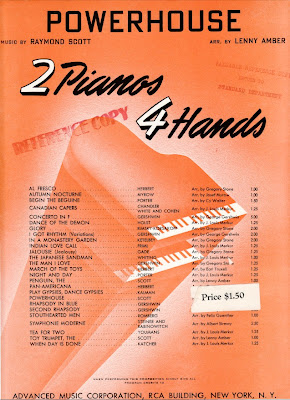 Posted by Jeff Winner at 1:35 PM No comments: 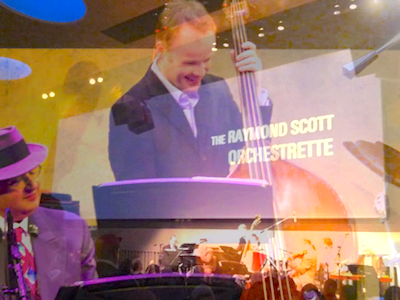 Watch the new video slideshow of photos with music that tells the story of The Orchetrette's concert at LINCOLN CENTER in NYC, last month, to celebrate the 75th Anniversary of Raymond Scott's classic tunes. >>> See it on: YouTube (or browse the photo album: here) 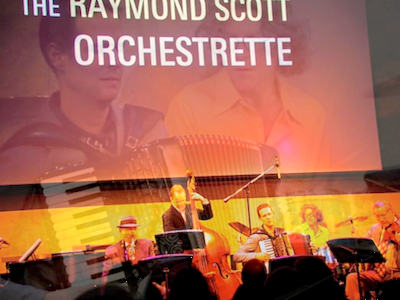 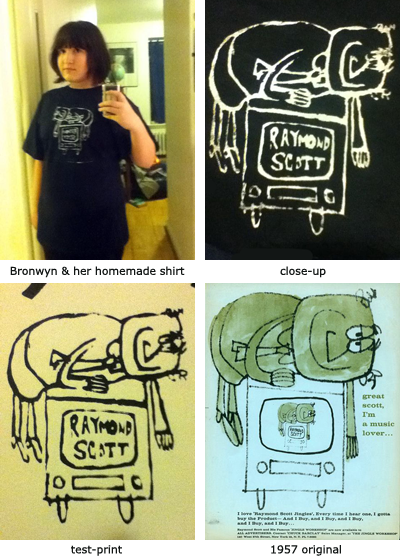 Recently, I reported that 13-year old student Bronwyn Gragg had painted a portrait of Raymond Scott for her high school art portfolio. She's now made this t-shirt based on a paper insert that was included with the 1957 promo-only LP, The Jingle Workshop, a collection of (non-electronic) musical commercials by RS.
Posted by Jeff Winner at 7:51 PM 1 comment: 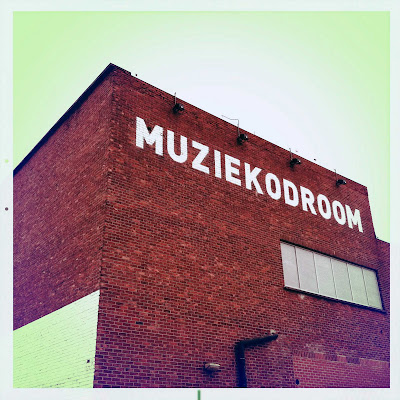 Muziekodroom in Belgium will host a screening of the Raymond Scott documentary film, DECONSTRUCTING DAD, on January 19th at 8:00pm. A DJ set by Micha Volders of The Vermin Twins will follow, and sponsors include Coca-Cola, and Red Bull.
Posted by Jeff Winner at 3:42 PM No comments:

Good news for wax maniacs: to celebrate the 75th ANNIVERSARY of Raymond Scott's music, the Basta Audio-Visuals label (working with the RS Archives) has reissued a pair of classic Scott 1950s LPs in 180-gram 12" vinyl format. Both meticulously replicate the original artwork in every detail.

"THE UNEXPECTED" by Raymond Scott & The Secret Seven — While serving as an A&R director for Everest Records in 1958, Raymond Scott produced an album for singer Gloria Lynne. The LP's sidemen included many of the same session players on Scott's mysterious 1959 album, "THE UNEXPECTED" — performed by his all-star jazz-legend supergroup, The Secret Seven — whose identities remained confidential for decades. The secrecy extended to withholding the band member's names from the LP jacket, but as music historian Nat Hentoff wrote in the liner notes, "Jazz aficionados will instantly recognize the players." The members are now known to be Elvin Jones, "Wild" Bill Davis, Milt Hinton, Harry "Sweets" Edison, Kenny Burrell, Eddie Costa, Sam "The Man" Taylor, and "Toots" Thielemans. NOTE: Basta's vinyl pressing is the extremely rare STEREO mix — the stereo version will not be issued on CD/digital-download. • Order: here <<< • Listen to a track from this album: "Waltz Of The Diddles" by Raymond Scott & The Secret 7

"THIS TIME WITH STRINGS" by Raymond Scott & His Orchestra — Scott musically re-invents his compositions for full-orchestra and strings on this 1957 album. RS favorites like "Powerhouse," "The Toy Trumpet," and "Twilight in Turkey" are retooled for expanded setting — but that's not all. "There are many of the Quintette things in this LP," said the composer in the original liner notes. "Also things for dance band, material written for Broadway, the movie screen, and some of my recent writing. Indeed, a potpourri, given Hi-Fidelity dressing, and a certain vividness in string treatment." The album was recorded in glorious monophonic sound, which is retained on the vinyl. No artificial processing. Crank up the Hi-Fi! • Order: here <<< • Listen to a track from this album: "The Toy Trumpet" by Raymond Scott & His Orchestra
Posted by Jeff Winner at 12:13 AM 1 comment:

YO GABBA GABBA! and DJ Lance Rock:
"What’s In My Bag?" — watch the video 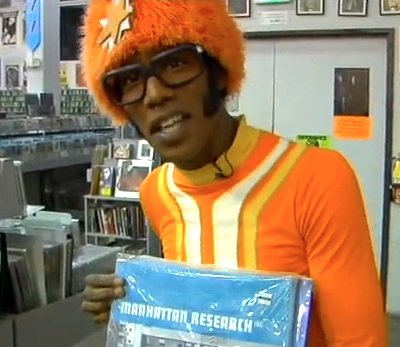 DJ Lance Rock is the host of YO GABBA GABBA!, a live-action TV show on Nick Jr. geared towards children, yet has a strong adult following too. The show regularly features guests like Biz Markie, Leslie Hall, Elijah Wood, the Shins, and Mark Mothersbaugh.

In this segment, DJ Lance Rock goes to Amoeba Records for presents for the show's characters. For Plex, he chooses the 3-LP vinyl version of the "MANHATTAN RESEARCH INC." 2-CD/144-page hardcover book set of Raymond Scott's electronic music. Watch it on YouTube: here <<<

NOTE: A slight but important correction to Mr. Rock's info — although the compilation does indeed contain recordings from the 1950s and '60s — there's in fact nothing from the 1970s.

The Book of Drugs 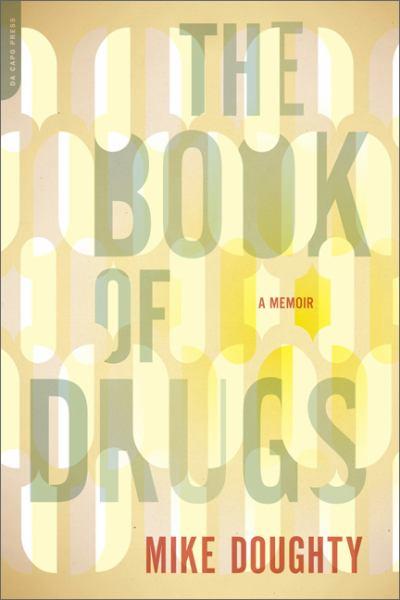 Mike Doughty, a prolific multi-tasker who issued 2 new albums in recent months, has published his compelling memoir, THE BOOK OF DRUGS. As the press-release states, it features "cameos by Redman, Ani DiFranco, the late Jeff Buckley, and others." The book also mentions the Raymond Scott sample loops that Doughty memorably incorporated to great effect into 3 songs with his 1990s band, Soul Coughing. Excerpts, detailing tensions with his former bandmate:


• • • • •
"There's two ways to play the sampler," the sampler player said, "as a conventional keyboard, or to trigger sound effects." I hoped I could convince him otherwise.
I brought some CDs over to his house. There were a bunch of sounds I wanted him to use: Howlin' Wolf, the Andrew Sisters, Toots and the Maytals, The Roches, Raymond Scott, Grand Puba, a cast recording of Guys and Dolls.
His house was so organized, it made me feel weird. He had a master's degree in composition from an uptown conservatory and was well inculcated in the conservatory mind-set — he called rock drummers "percussionists" and used terms like sforzando when discussing how to best approach a rhythm that I'd ripped off from Funkdoobiest. ...
The repetitions of dance music were foreign to him. "You mean, you want me to play this over and over again?" he asked in rehearsal.
"Yo, G," said the drummer, "just hold down that there key with some duct tape."
He was too proud for the duct-tape maneuver, but he became OK with the repetition. ...
There's another interview out there that I can't find: the interviewer mentions the Howlin' Wolf sample, Andrew Sisters sample, the Raymond Scott sample, and he asks the sampler player what makes for a great sample. The sampler player answers at length, and quite pedantically, about how he selects and manipulates them. But wait — though certainly the guy's fantastic at what he does, no question — the interviewer guy's talking about samples that I came up with.