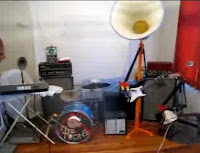 In the 1960s and '70s, Raymond Scott developed an instantaneous composition-performance machine called The Electronium. It was Beethoven-in-a-Box, designed to compose via artificial intelligence and play new music in real-time. Berry Gordy placed an order for one, and Scott continued to modify it for the Motown mogul throughout the 1970s. The device was never effectively completed, and eventually the inventor cannibalized it for spare parts.

Who knew the thing had punk grandbrats?
Posted by Irwin Chusid at 11:17 PM