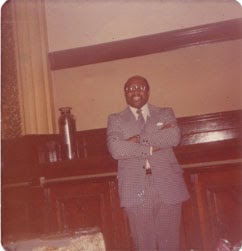 The new Basta album Raymond Scott Rewired features a radical overhaul of the entire Scott catalog by three of the music world's premiere remix artists — The Bran Flakes, Evolution Control Committee, and Go Home Productions. It was released on February 18.

The final track, Scott's iconic "Powerhouse," which was collaboratively layered by the three mixmeisters, features a special guest. The late, legendary outsider scat-master William "Shooby" Taylor, a.k.a. "The Human Horn," takes a few vocal turns throughout the mix. I chronicled Taylor's story over at a website devoted to my Y2K outsider music book and CDs, Songs in the Key of Z. Taylor's idiosyncratic vocal stylings were studio-recorded in the 1980s over commercial LPs by artists like Miles Davis, the Harmonicats, Erroll Garner, Eddie "Lockjaw" Davis, and Johnny Cash. Needless to say, these artists were not consulted about the collaborations, and all went to their graves none the wiser.

I own the dozen or so Shooby master reels, which contain 94 tracks, many of which I intend to release digitally in the near term. The samples used in "Powerhouse" originated from a series of a cappella recordings by Taylor. Buy the album — or at least the track — to appreciate Shooby in a remarkable setting. You can hear (and buy) four Shooby solo recordings in the iTunes Store: "Stout-Hearted Men," "Lift Ev'ry Voice and Sing," "Indiana," and "It Gets Better All the Time."
Posted by Irwin Chusid at 10:04 PM