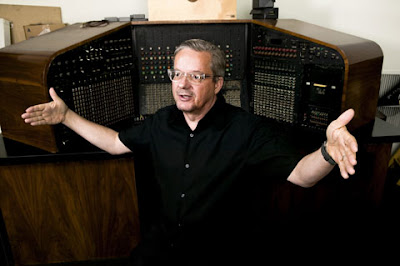 LA WEEKLY: One filing box is marked "Raymond Scott notes," Scott being one of the most important and underappreciated musical minds of the 20th century. [Mark] Mothersbaugh rescued much of the writing and paperwork from Scott’s garage, and though the two only met once, they seem like kindreds. In the 1930s and 1940s, Scott composed wildly imaginative and mathematical big-band music before abruptly changing gears in the late '40s to start building early electronic instruments. He earned his living by using the machines to craft radio commercials for, among others, Vicks Medicated Cough Drops, Bendix ("The Tomorrow People") and Auto-Lite Spark Plugs. Standing majestically in one corner of Mutato's basement is perhaps the Holy Grail of early electronic-music instrumentation: Raymond Scott's legendary Electronium, considered to be the first-ever self-composing synthesizer, which Mothersbaugh purchased in 1996 and has vowed to restore.
Posted by Irwin Chusid at 6:21 PM