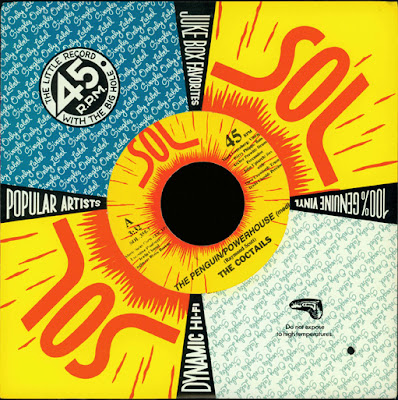 One evening in 1992: dinner at Maxwell's, the legendary Hoboken tavern/rock club. A bunch of bands I'd never heard of were booked for the back room. Dinner was first priority. Mid-meal, buddy and fellow WFMU DJ Gaylord Fields came running down the corridor that links restaurant with club, ordered me to drop the fork, and proclaimed, "Come back here. The Coctails are playing 'Powerhouse'!" I zoomed in and caught 2/3 of the band's rambunctious take on the Scott classic. Later I found out it was half of a medley that opened with "The Penguin."

After the set, I found the band in the downstairs dressing room and complimented their arrangement. We became fast friends, which prompted several stayovers at their Chicago loft in the next few years (during which I met their buddy, Chris Ware, the incomparable illustrator).

In 1993, the Coctails invited me to join them in the studio for their first recording of the Scott medley, on which I banged some percussion. The final mix was released on SOL (Singles Only Label—"The little record with the big hole"), a boutique vinyl venture by Nicholas Hill and Bob Mould. The track was subsequently reissued on the group's 3-cd retrospective Popcorn Box (Carrot Top Records).